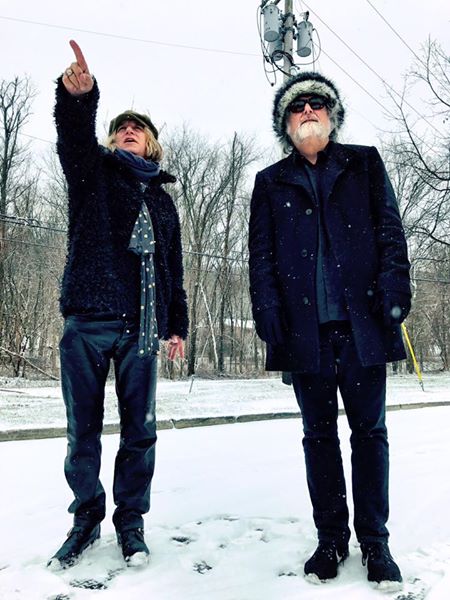 Peter Buck and REMHQ’s David Bell had a quick conversation over the weekend about the upcoming Help the Hoople benefit for Scott McCaughey. Scott is currently recuperating from a stroke he suffered while touring in November. The benefit is scheduled for Jan. 5-6 in Portland at the Star Theater and Wonder Ballroom. For ticket info and to bid on online auction items visit http://www.helpthehoople.org/

HQ: When did you first meet Scott?

Peter: I met Scott in ’84, and he gave me his band’s record which I really liked; we hung out in ’85 and played in ’86, and he and his band stayed at my house. We had some really wild parties there with those guys. I remember when I moved to Seattle in ’92-’93, I literally picked up the phone book, looked up Scott’s name, and it was in there, and I said, “Hey, I’m in town… what are you doing?” We started hanging out immediately, and soon thereafter started making records. And we’ve been each other’s right hand man ever since.

HQ: What was his band the Young Fresh Fellows like?

Peter: I saw the YFF who were contemporaneous to us in like ’83, ’84, ’85; we all travelled the same routes. We got a little bit bigger than them, but we were all still hanging out in the same clubs, none of which exist anymore.  They were a great band, great players, but it was completely unpredictable–it could be insane one night, maybe a little less the next, but it was always really fun and a great vibe going to see them.

Peter: We wanted extra guitars on the ’95 tour for Monster, so Scott was perfect for that. The fact that he can play bass and piano and sing background vocals was super helpful as well. R.E.M. used him on every tour and recording session from 1995 until the very last thing we did.

HQ: How’s Scott doing? He’s back in Portland we hear. Will he be at the show?

Peter: I haven’t seen Scott in a few days, but he’s talking and walking, and, as to be expected, having real issues with both. I don’t think he’s singing yet, but he’s playing guitar and bass. And, if he can, he’s planning to play a few songs at the benefit, and to continue on tour with Filthy Friends after that. He might be concentrating on just playing the bass and not vocals and of course that’s fine.

Scott’s a strong-willed person, and he’s a hard worker… he works 12 hour days. The stroke was just a fluke. I don’t know what that was, but I really hope he’ll come back 100%. At the very least, he’ll be my bass player (in Filthy Friends) for a month or two. At this point, we have shows in 2018 in Athens, Atlanta, Seattle, and Portland. Given how it goes in the next five days, those shows are not cancelled. Assuming Scott can stand the rigors of doing it, he wants to do those shows. Those shows are still on at this point.

HQ: How did the whole Help the Hoople benefit for Scott in January come together?

Peter: Josh Taylor started putting something together almost immediately after Scott’s stroke and called me, using me kind of as a liaison. Josh knows all the musicians, and I’ve played with them all. I started texting some people with the idea that we would do a benefit on these two days, Jan. 5-6, seeing if they could come down to do something to benefit Scott. I said, “Hey, It might be acoustic, it might be three songs, if you can commit.” Everyone I called said yes immediately, and the people who aren’t doing it are out of town.

It’s going to be two full nights of different music which is really super exciting, and we’re expecting some cool things.

HQ: For the uninitiated who might know more about musical nerve centers like Athens, Austin, and Seattle, for example, what is it about Portland that makes it such a special and unique musical community?

Peter: It’s like Athens was in the old days in that no one got really famous, and there are a whole lot of people who play together in different arrangements. Of course, it’s a bigger city, and there are bigger gigs with bigger bands coming through, but it’s not like New York, and it’s not like a town where people get a costume together and a designer or a producer to help them out. People make records on a more organic level, like my friends and I all do.

HQ: Who are you looking forward to seeing and playing with at the Hoople benefit?

Peter: Both shows have great people that I’m playing with on both nights. Personally, I haven’t seen The Decemberists in a couple of years, so that will be super great. But every single person on the bill, I’m a friend of and fan of, and Mike will be there, so we’ll be sitting in with various people.  I recorded some tracks a few years back with The Decemberists, and Colin is a big R.E.M. fan, so we’ll probably figure something out–he knows some R.E.M. songs.

HQ: Patterson Hood, an Athenian at one time who is now living out in the Pacific NW is on the bill as well as James Mercer of the Shins…

Peter: Yea, I’m assuming I’ll play with Patterson to one degree or another. That will be fun.  And, yea, it’s cool that James is on board too; I think he’s going to do a three or four-song acoustic set, and I’m going to back him up. With these king of things, it will be crowded, and we’ll be trying to get a lot in, but I think it will be a cool experience for everybody.

HQ: Scott has made a big impact on a lot of people, fans and musicians…

Peter: Scott is the heart of the Portland music scene, and everyone is coming together to help him out. I’m being really optimistic that he’s going to get back to where he was in the next six months. He’s already playing guitar and already playing bass and writing. He’s a very stubborn person, and I think we’re going to be able to get him back.