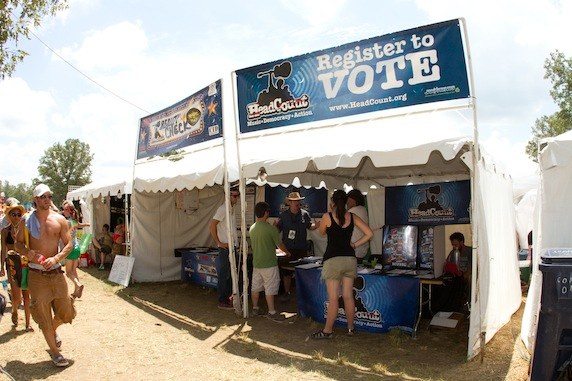 R.E.M. friends! Here’s a roundup of some timely politically-themed interviews, videos, thoughts, happenings, and links. Good to see some great stuff brewing and our gratitude to these friends, colleagues, and committed activists making a difference.

Today, September 25th, is National Voter Registration Day. NVRD was established to help make voting easier and more accessible in the USA due to the fact that in 2008 75 million Americans who were eligible to vote didn’t, many because they weren’t registered. Since the band has always championed voter participation and political engagement, we wanted to pass along information about the good work some of our musician friends are doing along with a select group of activist organizations who are doing much needed work regarding voter registration. After you have a look, we would appreciate it if you would consider passing along the links to your friends and social networks to get the word out. The good news is if you haven’t registered to vote yet or know someone who would like to vote but who hasn’t registered, there is still time to do so. Election day, November 6th, is but a mere six weeks away!

First up, Dave Matthews Band has made an updated edition of the video for their new single “Mercy” in honor of NVRD with a special message from Dave about voting. Thanks to our good friends Erin and company at Air Traffic Control for getting out the word about NVRD and Dave’s involvement. DMB’s video includes an embedded link to HeadCount.org’s voter registration page (watch it below and pass along this link http://www.youtube.com/watch?v=-VzHWFz8jxc):

Learn more about Head Count, a grassroots organization that uses the power of music to register voters and raise social consciousness, at headcount.org.

90days90reason.com was conceived by two guys originally from Chicago, Dave Eggers and Jordan Kurland. In late July, they looked around and saw that many of Obama’s voters and donors from 2008 needed to be reminded of all he has accomplished, and all he will do if given another term. They asked a wide range of cultural figures to explain why they’re voting for Obama in 2012, in the hopes that this might re-inspire the grassroots army that got Obama elected in the first place. Every day, a new reason will be posted—in short, Twitter form, with a longer essay available on the site. Please spread the word and check out Michael Stipe and Tom Gilroy’s reason #23.

ColorOfChange.org exists to strengthen Black America’s political voice. COC’S goal is to empower their members to make government more responsive to the concerns of Black Americans and to bring about positive political and social change for everyone. The right to vote is one of our most basic rights. This year, unfortunately more than any other, we’re seeing unprecedented coordinated attacks on the voting rights of millions of Black folks across the country. ColorOfChange is going all out to register as many voters as possible, and they can’t do it without your help. Join them in the fight to defend the voting rights of Black Americans. Check out Colof Of Change’s voter registration tool at ColorOfChange.org/ and learn how you can get involved.

DRIVE-BY TRUCKERS TALK TO THE DAILY BEAST ABOUT POLITICS, HISTORY, AND THE ECONOMY

Patterson Hood of Athens band Drive-by Truckers and bandmate Mike Cooley talk to John Avlon about their influences, politics, history, and the economy. ‘I saw it coming,’ Hood said, ‘it wasn’t a surprise.’ Go to the thedailybeast.com to watch the interviews with Patterson and Mike.

UltraViolet is a community of women and men, fighting to expand women’s rights and combat sexism everywhere–from politics and government to media and pop culture. This season, UV’s focus is getting women out to vote. If anything, this year has shown that women’s most basic and fundamental rights are at risk. As the 2012 election draws near, it’s incredibly important for all women to get ready to vote, and the first step is to register. Check out UltraViolet’s Voter Registration Center to register and find out all the info needed to vote and make a difference at weareultraviolet.org

Be sure to have a look at Erin’s article at Huffingtonpost.com in which she discusses the creative role musicians are playing in getting the word out about voter registration.

Check out this post on The Boss’ 63rd birthday at Facebook.com!