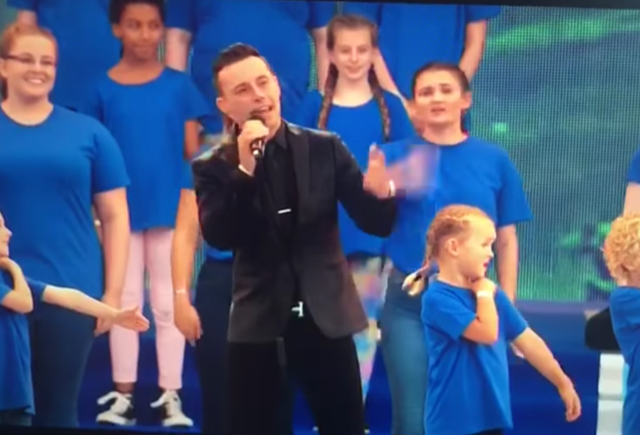 Pope Francis will get to hear R.E.M.’s Everybody Hurts twice this weekend when he visits Ireland for the first time in many years.

Earlier this year Irish priest Father Ray Kelly brought the song to a brand new audience when he performed it on UK talent show Britain’s Got Talent, a clip of which clocked up 8 million plays on You Tube and doubled plays of the original track by the band on Spotify in the UK and Ireland. Father Ray spoke movingly of how he had channelled his experience as a priest comforting the bereaved into his performance.

So embraced is the song now by all faiths in Ireland, British country artist Nathan Carter will perform Everybody Hurts for Pope Francis at Croke Park backed by a 100 member choir at the World Meeting Of Families concert on Saturday evening. Starting at 6:30 pm (Irish Time, 1:30 pm Eastern time)

Then on Sunday, Father Kelly will perform Everybody Hurts in front of an expected half million people in the Phoenix Park during his opening set before Pope Francis begins his celebration of mass at 3 pm Irish Time. Although we don’t have the exact time for either performance, coverage of both events will stream free worldwide on the RTE Player across Desktop, iOS and Android apps, and on the RTÉ News Now iOS and Android apps. http://bit.ly/2wcHZ8z