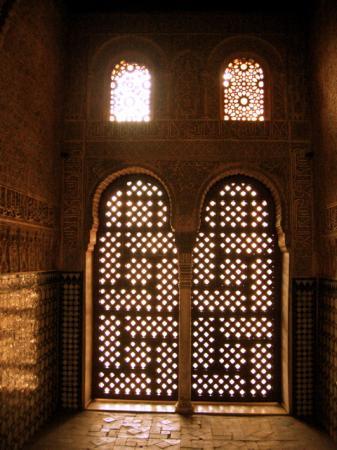 Ever since I heard that Clash song Spanish Bombs off London Calling, back in law school days (also early R.E.M. days), I have wondered what Andalucia would be like….as we are starting this last part of the tour in Granada, I am getting to find out. What a great town: compact, bustling, very old-world European with a vibrant street life, crowds of people including lots of tourists and students, a serious courtyard/cafÃ© culture and one of the definite architectural draws anywhere in the world…most of us have taken in The Alhambra and it is, as billed, just breathtaking in its scale and grandeur and detail, and we have all been enjoying the rich and ancient cuisine from the area, with some of the best olive oil ever tasted. Final rehearsal tonight and first show back tomorrow. Everybody seems to have enjoyed the break and everyone looks rested, some tanned, all rarinâ to go for this final run through Europe.

Starting tours here on the Iberian Peninsula is getting to be a good habit for us (click here to read an article from Ideal.es (subscription rqd) on the band in Espanol): fun corners of the world to spend the few days of preparation, tremendous crowds…and this time, the sense of discovering places in Spain we never have traveled before: Granada, Torreviejo, Zaragoza and Gijon then up to Magdeburg in formerly East Germany for a town square show, then the legendary Rock Im Ring/Rock In Park festivals that we never have played before, Italy, the British Isles, Scandinavia, Germany…all culminating in the final weekend including Hyde Park in mid-July; we all look forward to this part of the tour (although snowy Eastern Europe in January had its charms too! They were just harder to appreciate at the time).

In others news: well, Electron Blue should be getting some airplay on a European radio station near you, and the awesome video, shot off the screens in Europe in January and directed by tour video director Blue Leach, is getting some airplay but may also be seen by clicking here; it appears that Wanderlust will be the summer single at least in the British Isles. Stay tuned for more details as they develop…

I will of course have more to report once the shows get rolling, but we are here and ready to goâ¦hope to see you somewhereâ¦these shows are going to be fun.