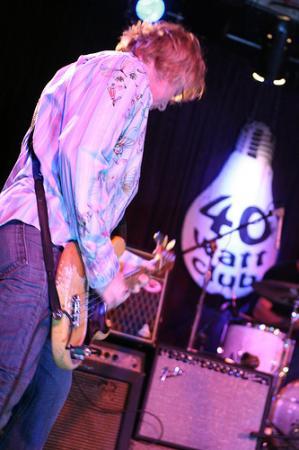 As the old Sam Phillips line goes ânostalgia isnât what it used to be”; well, last night it was pretty fun to see a few generations of Athens musicians come together for a benefit for the local charities Community Connection and Family Connection/Communities in Schools. Billed as Finest Worksongs: Athens Bands Play the Music of R.E.M., the night featured many of the townâs top current-day musicians, everyone from Claire Campbell from Hope for agoldensummer, to Tin Cup Prophette, to the Modern Skirts, to Bain Mattox, to Bill Doss of the Sunshine Fix, accompanied by a torrent of people from the various Elephant Six Collective bands (known last night as The Observatory), to Patterson Hood with some of the Drive-by Truckers, to Five Eight to R.E.M., comprised of the original Berry, Buck, Mills and Stipe…needless to say, it was fun for all.

For me, the mood was captured during the Modern Skirtsâ moving version of one of R.E.M.âs early songs Perfect Circle: â….a perfect circle of acquaintences and friends….â; it was indeed that: many familiar faces from over the years, both onstage and off, musicians playing with each other, with Bain doing accordian duty with the Skirts on the sparkling Find the River, as well as accompanying his wife Amanda (Tin Cup Prophette) on an eerie Nightswimming… and what tasty choices of Tongue and Leave by Amanda and band . . . and speaking of inspired sets, how about the Observatoryâs picks of Feeling Gravitys Pull, Pilgrimage, Underneath the Bunker and These Days…not to mention the originals doing a short set of Begin the Begin and South Central Rain…as the night progressed, the Five-Eighters were on fire with mostly rockers (e.g., Radio Free Europe b/w Sitting Still), but also a tremendous guitar-only take on Leaving New York–I particularly appreciated the liberties taken with the classic Driver 8 (Fiver-8)–the incomparable Patterson and friends romping through everything from Burning Hell (it took a minute to remember that one), Belong, Second Guessing, and So. Central Rain (joined by Peter and Mike) to a rollicking version of Rockville….Bain doing stunning record-quality versions of Finest Worksong and Losing My Religion, then a slowed-down, dark take on Fall on Me…Claire gamely opening the music with other-worldly interpretations of Swan Swan H and Wendell Gee, and hours later, everybody climbing onstage for a crowded finale of End of the World (what else!?)

It was one of those nights where no one needed an encoreâ the whole show seemed like an encore: a celebration of the music created by R.E.M. over the years, the people in Athens who continue to make it a creative and vibrant force, and the town itself, where this kind of thing seems to happen once in a while. Barrie and Velena at the 40 Watt, and Jeff and Troy of Athensmusic.net, are to be commended and thanked for making this thing happen in such a touching and fun-filled way–of latenight Athens times, this one ranked for me (not that one can really rank things across the years…) with the first night John Cale played the Georgia Theatre, the party after the Gang of Four show at one of the earlier iterations of the 40 Watt, an early Stranglers show at the old Tyroneâs, not to mention the many throbbing Pylon, Side Effects and Love Tractor shows there, and the several times R.E.M. played Legion Field at the University…and the last time R.E.M. had played the 40 Watt, the year was 1992 and the charity was Greenpeace and their NRG project…but i digress; we are blessed to still be here enjoying our hometown.