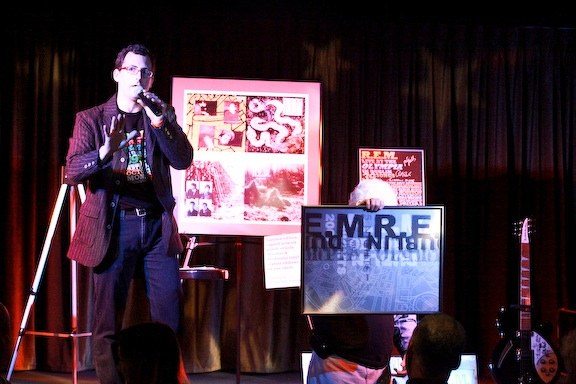 Well, LIVE AT THE OLYMPIA is finally out worldwide and hopefully you will find it wherever you are looking online, in a record shop, or some other retail experience. It has been a real labor of love getting this one up and out, as it is somewhat of a different animal– live, specific to a very special set of shows, without the Biggest Hits, with the amazing artwork Chris and Michael created . . . and the film by Vincent Moon and Jeremiah. We are real proud of this installment in R.E.M.’s canon, and I would think this one would have to be in any serious collection of the band’s work. Early reviews seem to agree:

The Big News here in Athens last night was the best-ever Listening Party, once again benefiting Community Connection and Family Connection/Communities in Schools, two local groups doing vital work in our town. This year, the party was held at the excellent new Hotel Indigo, already becoming a destination for great events here in Athens-town. The record sounded fierce on the cracking sound system, the Big Screens made THIS IS NOT A SHOW sparkle, and the various auctions and raffles yielded a very handsome take for the charities involved. And a good time was had by all, many of whom have been at every listening party, a tradition dating back to 1992 and Automatic, and lately spearheaded by the estimable Jeff Montgomery, who thinks of most things and takes care of everything. Thanks all around and all of us at HQ had more fun than usual on a special night indeed. The auction highlights were various art items, many one-of-a-kind and some signed, a Rickenbacker 550 guitar signed by the guys (first and only time for that), the gigantic Presidential Suite at the Hotel Indigo, and a magnum of special ACCELERATE Friulian wine bottled especially for the band on their tour of Italy last year by none other than Mario Batalli and Joe Bastianich. Not your normal Monday night in our humble burg.

Work to do, so will sign off– enjoy the record and film and to be continued . . .

p.s. from further afield, in the category of Thank Goodness for the Mainstream Media (Still):

MIchael’s interview by Guy Raz on NPR this past weekend is worth checking out– a real in-depth, honest take on the Olympia and otherwise…

And speaking of politics, Matthew Alexander, a former military interrogator weighs in on the whole music and musicians and torture and Guantanamo debate.