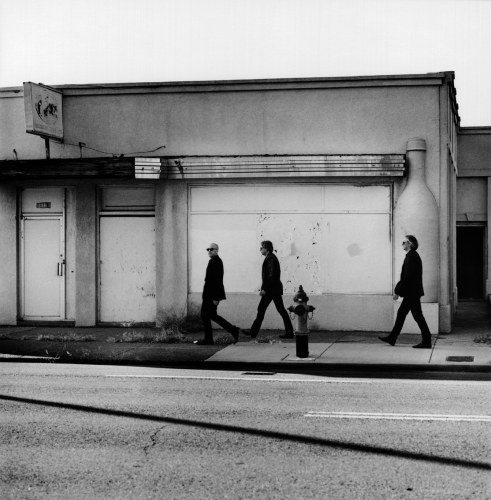 Two years ago today, on September 21, 2011, Mike, Peter and Michael made the announcement, from sort of outtatheblue, that they had decided to “call it a day” and that R.E.M. would cease to exist in the active, record-making, touring together, making music mode of the past three decades. It was bittersweet for them, to be sure, for the people who’ve been privileged to work with them over the years, and for their families, friends and fans around the world. It had seemed like something that would go on forever but it won’t. Many beautiful, touching, heartfelt words were written, from all over the world and all around the Internet, too many to recount here, but they all went into a file marked “bittersweet.”

The two years since the disbandment have been good for the guys– Peter and Mike have done some music and other things that keep them interested; Michael has explored further into his art and digital worlds; they’ve all traveled, met up occasionally. All of them are very much enjoying the “no more R.E.M. but still here” phase of their lives. It was understandable for them to step away when they did, and I am happy in looking back on the announcement day that they are all generally happy, healthy, strong and the same fine people I have known since we were all oh so much younger.

And because a link seems like a fine thing to include here, I will add this from one of my all-time favorite live moments for the band– R.E.M. on South Africa Freedom Day, 2001 at Trafalgar Square on a rainy night, Nelson Mandela in the audience, St Martin in the Fields and Big Ben through the mist, and making an indelible impression on that historic site.