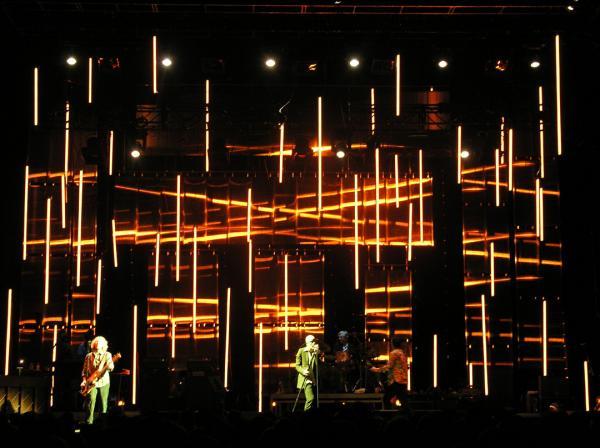 Well, we couldnât have asked for a better start to the European leg of the tour–as in earlier trips, Portugal and Spain meant very enthusiastic and appreciative fans and all three shows over the weekend (Lisbon, Madrid and Barcelona) were just terrific. The band played great, enjoying throwing in some change-ups in the set list (âDeparture,â â7 chineSe bros.â), the visual dimension afforded by the digital screens really enhances the experience for people in all corners of the arena, and a raucous, spirited crowd that at times was louder than the amplified music coming from the stage–all in all, a great beginning.

And with sold-out shows in Switzerland and Italy this week, then the adventurous part of the tour in the former eastern bloc, much of which we have never visited, coming up before the end of the month, this ambitious winter indoor tour we have put together should really be at a high pitch by the time we get to places like Holland, Germany, England, and Ireland in February (and then we get really adventurous, and jet-lagged, with shows in South Africa, Japan, Hong Kong, Australia and New Zealand, all before our âspring breakâ).

As you might imagine, spirits are high and everybody is still feeling the positive effects of the holiday break between the North American and European legs of the tour. We have an exceptional crew, many of whom have worked with R.E.M. before but quite a few who are new to our tour; it is clichÃ©d to say, but without those people, no way the show goes on night after night, and it is quite a show these days: the video director, who is working closely with the guys (especially Michael) to get the visuals on the screens, is a young Brit named Blue Leach. We knew about him for one reasonâwhen we played the Move Festival last July in Manchester, we were struck by how interesting and different the audience screens looked that day–it was really cool stuff, and quite distinctive, so we tracked him down and stayed in touch over the intervening time, and when it became evident that we were going to incorporate some film/video into this part of the tour (first time since 1995 and the monster days), we turned to Blue as the main co-conspirator (along with Michael and Susanne Sasic, who designed the show and lights…). Like most of what people see on an R.E.M. tour, this part of it is an evolving collaboration between several people (and it usually gets better with time).

As for other R.E.M. news that comes to mind, “Aftermath” is just going to radio in much of the world, so watch for the video and listen for the song on a station near you (we hope). And “Electron Blue” is looking like the choice for the third single in the United Kingdom, who as usual go through singles at a faster pace than the rest of the world…sometime in February, Warners is re-releasing the R.E.M. catalogue in the nascent âdouble discâ format: a CD, along with a DVD-A (with of course some extra/exclusive content, live material, EPKâs/documentaries and the like). The idea is to introduce the DVD-A format that a lot of people think provides the best fidelity yet, in a package that is a fairly good value, especially since it is coupled with a normal CD (maybe to replace the lost or worn-out one). We will see.

So far so good on the tour. Hope you can see a show soon.