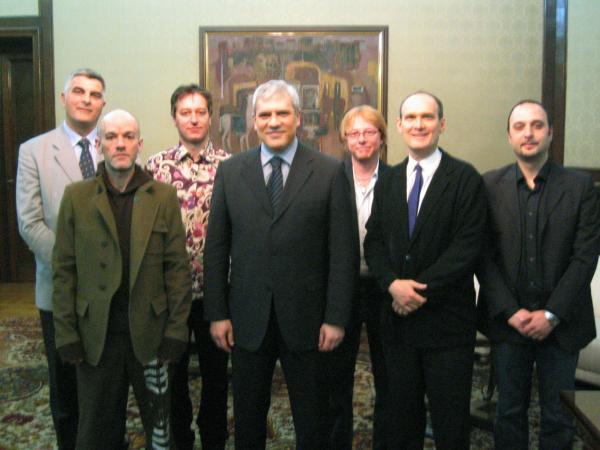 Well every day is different on tour, but some are more interesting than others; today was one of the particularly memorable ones: we all arrived in Belgrade after a rocking, enthused show last night in the beautiful old city of Zagreb–the band were invited to meet the Serbian President, Boris Tadic, at the Presidential Palace, and we of course jumped at the chance. It was fascinating, low-key, relatively informal, and there is a lot of common ground between the President and the bandâa lot of journalists were there, as R.E.M. has a long involvement with this part of the world, even if it is our first time to actually play a show here; so that was pretty heady stuff, and an experience that really made an impression on the band; from there we walked a short block to a gallery, Ozone, that had a cool R.E.M. art exhibit up: everything from the special package posters, to new and old publicity photos, to all the videos, DVDâs, CD covers, everything and anythingâ¦someone had put an awful lot of work into assembling it, and the guys were very taken by the whole event. They feel privileged and honored to be here, and tomorrow, they will finally get to play a show in the home of B-92, recipient of the 1998 MTV Free Your Mind award.

Anyway, late to a meeting but wanted to report on the latest; we are so enjoying being in these places new to us. It is very humbling and exciting at the same time.