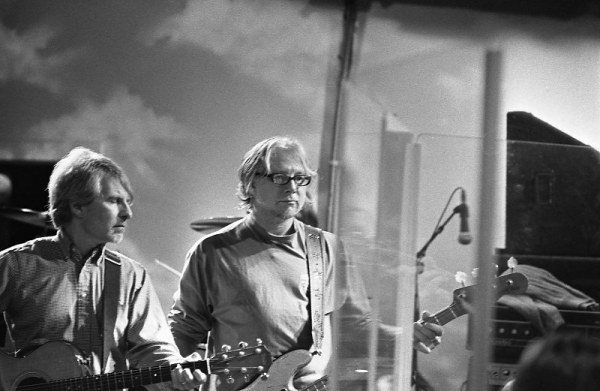 Mike Mills joined Chris Stamey, Mitch Easter, and a band of some serious renown last night for the first of two shows celebrating and paying tribute to Big Star’s “lost album” Third. It was quite a night . . . where to begin? First, the material was pretty stellar as Big Star’s Third (also released in different versions under the name Sister Lovers) is to me one of the defining records of the rock and roll era– I have loved it since hearing it as a first year law student way back in 1979, only a year after its release (but 5 years after its recording, according to Wikipedia which we consulted to settle a friendly dispute at dinner). It is dark, haunting, ethereal, melodic, grim, sweet, sad and strange. . . oh and brilliant, absolutely, all at the same time. Second, the group of musicians were as talented as they were diverse, from Mike and Chris and Mitch of unmatched NC-Hall of Fame type lineage, to singers and players from current and recent Chapel Hill and area bands like Mayflies USA, The Old Ceremony, Birds and Arrows, The Love Language, The Rosebuds and many more, to Jody Stephens, the drummer and sole-surviving member of Big Star, as well as a magical string section that pulled off the arrangements and added just the right tones and textures and subtleties to the rock happening just to their right (and of course, where else would a guy play a basketball as percussion? only in Chapel Hill). Twenty people onstage at the Cat’s Cradle has to be a record– a pretty amazing night of music. I got chills up and down several times during the show, most memorably during Django Haskins‘ spot-on take on Holocaust– just a raw, emotional core of a song. I cannot imagine a more sublime or unlikely night and as I told Mike after the show– I came expecting to have a good time, but I had no idea it would be THAT much fun. The show benefited two charities: KIdzNotes and the New Orleans Musicians Clinic. Both do great work with kids and music and were deserving beneficiaries of all the work, energy and creativity that went into making the shows happen. For anyone in the triangle area, go see this show tonight (Friday) at 8pm– you will not be disappointed. And for the rest of us, there is a recording TODAY going out at 12 Noon on NPR’s “State of Things” . As I walked away from the club tonight, with Neil Young’s Harvest providing the soundtrack, I enjoyed the scene of musicians and friends hanging out and visiting, pleased that they had pulled off something so ambitious, improbable and GOOD! Well done all, and Thank You Friends.