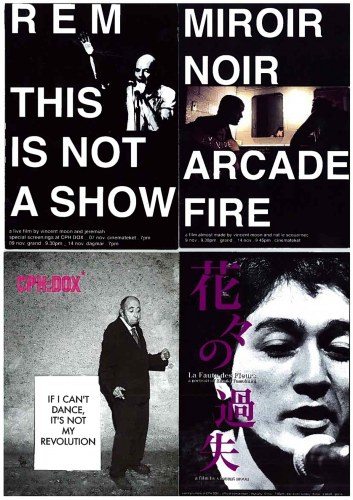 Where I am here briefly for the Copenhagen Documentary Film Festival, which screened THIS IS NOT A SHOW the short feature we did from the Dublin shows. I’m having a good time in this stately old European capitol and from here I go to Kristiansand, Norway, for an annual academic conference that I normally have to miss due to touring and family considerations.

I have always loved Copenhagen every time we have been here on tour, but it is different being here by myself although getting to see Vincent Moon and the young and engaging organizers of CPH:DOX has been a treat in itself. Last night I walked a few blocks from the hotel to the imposing Danish Film Institute, CINEMATEKET on the edge of the King’s Garden and which serves as one of the hubs of the sprawling festival that covers the city and runs for ten days. Vincent introduced the films and we got to relate a couple of stories about how it came to pass that he and R.E.M. would work together over the course of the past two years– it all started in Dublin on about a week’s notice and has produced some of R.E.M.’s best film work ever, from ninetynights to the video for Supernatural Superserious to the Takeaway Shows as well as the two films screened last night here in Copenhagen, Six Days (2008) and This Is Not A Show (2009). It was quite a neat experience watching the two films together as they cover much of the same ground, focusing as they both do on the Olympia shows in Dublin, and it brought back many smiles and memories of that summer experiment in hospitality on Dame Street. The crowd was generous in its response and many people seemed to have been at various R.E.M. shows over the years here in Dublin and some had even made the trip to Dublin in July of 2007. Up above are picture postcards from the festival including Vincent’s hallmark film on Arcade Fire and one he is very excited about showing here about Japanese musicians, which he only finished yesterday.

LIVE AT THE OLYMPIA is out everywhere now and a few screenings continue to pop up– of course the bonus package and the vinyl package contain the DVD of This Is Not A Show, and the reviews continue to praise the record as a pretty amazing testament to the band’s formidable catalog (and to the quality of the recordings, a lot of which is how well they played the songs that week and much also goes to Jacknife Lee and his team for the capturing and mixing of the sounds). Speaking of Jacknife and his team, the whole gang is at it again, this time getting some new songs down in the early days of work on the next record. Which is very good . . .

p.s. I enjoyed sharing this particularly personal and compelling review of the Olympia record.

p.p.s. if you haven’t read it yet, pick up Richard Rodriguez’s captivating HARPERS cover story on journalism, San Francisco, digital citizenship and what is going on as we move from localism to cyberism, or if you must, here’s the link (highly worthwhile).