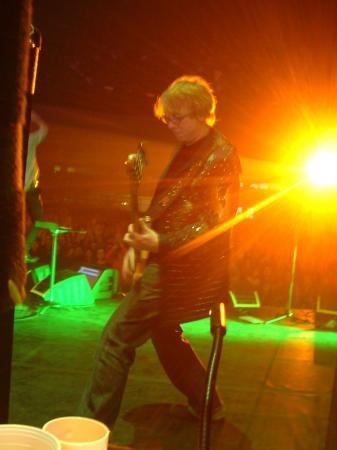 Ã¯Â¿Â½great to be back in the office after a long cycle of travel and touring, although somewhat overwhelmed by the avalanche of items greeting me, even in this digital age.

Impossible to summarize adequately the trip, but I tried to on a plane recentlyÃ¯Â¿Â½

We are finished with it now, the tour that started with the promotional shows in Europe back in September; continued with the Vote For Change/Bruce Springsteen shows in October in the States; carried on through some memorable North American shows in the Fall, none more so than Washington, DC on election eve in Constitution Hall, then 3 nights later, the Madison Square Garden show in New York (saddest four words in the English language: What Might Have BeenÃ¯Â¿Â½); on to Mexico City; the holidays; a tremendous indoor European tour; then our first-ever trip to South Africa and return trips to Japan, Hong Kong, New Zealand and Australia; a Spring Break; then a crescendoing summer outdoor tour throughout Europe, including some of the most memorable moments of the bandÃ¯Â¿Â½s career: Spain, Rock im Rain, Rome, Manchester/Loch Lomond/Dublin (all in 50-some hours), wonderful spots in Scandinavia, picturesque, rawking shows in Bonn and Dresden, Live 8/St. Gallen in 5 hours flat, Werchter (we have never not played Werchter on a summer tour since the band first started!)Ã¯Â¿Â½ some wonderful shows in England and Wales, the shock and sadness of July 7th in London, pressing on in Ipswich and Cardiff; then back to finish what we started with a massive, exhilarating, celebratory show in Hyde Park, a dream finally come trueÃ¯Â¿Â½ and now, it is over and we all resume whatever normal lives are.

One final interesting fact from the tour: of the 115 shows we did, some 46 were in places we never had been. Always fun to blaze new trails and for me, the favorite new places were Tallinn, Riga, Granada, Stavanger and all of South Africa. All those things add up to what many of us think was the best tour everÃ¯Â¿Â½ which 25 years on, is quite a nice thought.

And now that it is over and we have time to follow the news, some interesting websites we check from time to time: pbd.blogspot.com, davidcorn.com, dailykos.com, tompaine.com, and tpmcafe.com. All worthwhile, most of the time, from wherever you are- home or away.

P.S. Now that we are back, I get to eat at our favorite Athens restaurant Five & Ten, which has popped up in the news some of late: Gourmet and RunnerÃ¯Â¿Â½s World. Go Hugh Go!