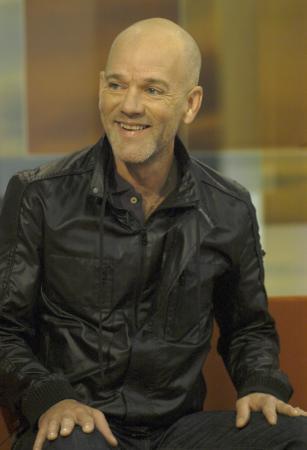 Things are heating up here in Athens with the impending release of The Best of the I.R.S. Years (1982-1987) And I Feel Fine on September 12th, exactly one week from today. We’re particularly pleased with how the “bonus” disc turned out with various band favorites, live tracks, outtakes, and other rarities, not to mention the DVD with its feast of obscurties and little seen videos from another eraâ¦ If you haven’t had a chance, click on the link to the mini-site from the main page of remhq.com where you can preview tracks and video. Click on this link to watch some just recently posted clips of the video for Wolves, Lower and a live performance of Radio Free Europe from The Tube. You can also click here for details on pre-ordering both the CD and DVD.

Michael just spent a couple of days in London doing some press for the record, and a good podcast from the Times of London is HERE; We will endeavor to provide links to ongoing coverage on our FYI page for those interested in reading some of the Michael interviews from wherever they are published (and in whatever language).

Although we are not officially involved, we are keenly interested in the 40 Watt Finest Worksongs show next Tuesday featuring many great Athens bands doing the songs of R.E.M. as a special listening party to commemorate the release of the Best Of and to once again benefit two worthy local charities, Community Connection and Family Connection/Communities in Schools, that have been involved with us all the way back to the listening parties from the Automatic days. It should be a great fun night and all thanks goes to Jeff Montgomery and Troy Aubrey of AthensMusic.net who have pulled the whole thing together. . .if you are in the neighborhood be sure to stop by for what will be an inspiring set of performances of R.E.M. music.

Next week, the guys will assemble here in Athens to rehearse with Bill Berry for the first time in a decade for their upcoming appearance at the Georgia Music Hall of Fame next Saturday night, September 16th, in Atlanta. It should be a fun and eventful night, given the other nominees, and the chance to see the original Berry Buck Mills and Stipe back in action, and while they are here, they are considering recording something for a yet-to-be-announced charitable project (too early to mention but stay tuned for details as they develop). Peter, Mike and Michael are ready to start the process of decisions relating to the next record, which they expect to start working on in earnest before too long. We will know more after next weekâ¦

Finally, Michael wanted us to mention the excellent post in the Huffington Post on our friend and a great Georgian, Max Cleland.

I guess that is it from here. Watch this space as these things develop–to be continuedâ¦