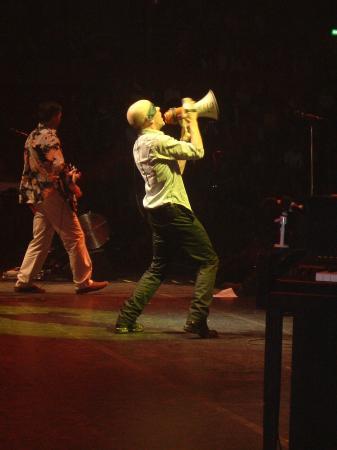 Well, we havenât gotten to Germany yet, but it sure feels like it with recent shows in Basel, Bolzano and tonight Ljubljana. All have had a distinctly Germanic feel, and all were the first time for us to visit. This afternoon we walked to the venue and found the Slovenian capitol to be lively, interesting, difficult to read sijgns in, and pretty cospmopolitan to an untrained eye. And, although this is our first show in Ljubljana, we have in fact played Slovenia beforeâthe last show of the summer 1999 European Tour was on the coast in Koper, where among other memorable aspects was the first time the band played with the Croatian band the Bambi Molesters.

The Italian shows over the weekend were fantastic: both Milan and Bolzano had been sold out for awhile, and the crowds were the best anywhere, as we have become spoiled to find in Italy whenever we are there–and the band played great with the new material going over rousingly and old favorites like âSeven chinese brothersâ and âSouth Central Rainâ sounding as timeless as ever. It is fun hearing âDepartureâ and âOrange Crushâ back in the sets from night to night, both bringing back memories of other years (1989 and 1995) given over to touring… tonight, lo and behold R.E.M. played âTurn You Inside Outâ for the first time since 1995, and that was a nice little jolt. Great that they keep (re)learning new(old) songs to keep things interesting for everybody. In Milan, Michael got a funny little surprise Friday night when he got to his microphone for âFinest Worksongâ…there a huge group of the fan/friends from Italy had worn blue masks approximating his raccoon stripe across his eye/forehead…a fitting tribute and it made for quite a visual. Hopefully someone got a picture that we will post; it was pretty hilarious; he got through the song but was cracking up with laugher inside–he said he felt like Ziggy-era Bowie.

We approach the next couple of weeks with great anticipation as we play many new places; While we expect a lot of new fans to be there, we also know from conversations lately that there are quite a few people out here following the tour or at least large parts of the tour. In Milan I met a Dutchman who had been to all the Iberian Peninsula shows and was enjoying Italy. Yesterday I met some guys in the Verona train station who have been to both Italian shows and have tickets for many of the upcoming eastern shows. Sounds like a great way to spend spring break from university…of course itâs not spring break! But hey, itâs a fine time to enjoy some shows and see some new parts of Europe.

I keep wondering if it is this cold in southern eastern Europe, how much colder will it be next week in northern, eastern Europe…? Guess we will find outâ¦for now, it is cold, outdoors and in!

PS: Late update from Ljubljana: Members of the Bambi Molesters, Chris Eckman of the Walkabouts, and legendary Slovenian rocker, Vlado Kreslin joined R.E.M. during tonightâs encore for a rocking version of the Iggy Pop classic âThe Passenger,â This and a rare performance of “Superman” in Bolzano are the first covers I can recall the band doing in awhile…