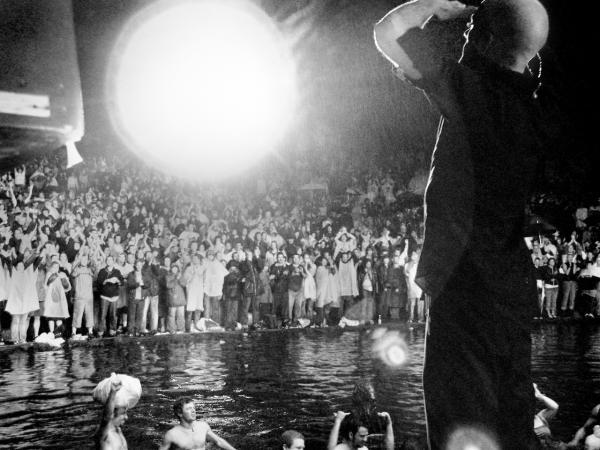 Tonightâs show, just completed, Â was one of the best of the tour. I donât know why…something in the air–(the moist air due to the daylong rain that greeted our arrival and stayed with us pretty relentlessly through the show); great support sets from Bright Eyes and The Checks, a wonderful setlist including rarities of “Turn You Inside Out,” “Disturbance at the Heron House,” Â “Life and How to Live It,” and “New Test Leper.” Whatever it was, it was tremendous–amazing crowd, Â huge energy, and all at a place we had been told was a lot of fun but we had our doubts…it has about a 60-foot shallow pond between the stage and the front row (definitely the first time we watched swimmmers in wetsuits and boats ready to fish people out of the pit…with ducks too!), but despite all that, or maybe because of all that, it was a memorable and resonant show for everyone there, especially the kids who decided to make their own private (wet) front row when the rain really started to come down, and the band obliged with a rousing, longer-than-usual version of “Have You Ever Seen the Rain?”, with Mike and Scott handling most of the vocal duties…the last time we visited New Zealand, Auckland was generally thought to be one of the very best concerts on that whole year-long tour; something about this place (and i am pretty sure it rained like crazy that night too back in Auckland). Â

Our arrival at the airport here today was also something pretty unique as the band received a high honor…a warm, spiritual, musical welcome by some of the native people from the area…quite moving for all of us, and it seems to have inspired the guys tonight or something did!

From here we go to Australia for the last part of this far-flung part of the world tour; first stop: Byron Bay above Brisbane, for the East Coast Blues and Roots Music Fesitval, Â where R.E.M. play a show with Sarah Mclachlan, Michael Franti & Spearhead, Gomez, Bright Eyes and other artists, then shows in some of the major cities before heading home for our spring break in a couple of weeks.

P.S. Â During the encore, as the band played a poignant and uncommonly timely “Nightswimming,” the waders in the front row slow danced and swayed in waist-high water; now that was quite a scene.

Setlist:
I took your name
Bad day
Turn you inside out
Outsiders
Animal
New Test Leper
High Speed Train
Great Beyond
Disturbance at the Heron House
Orange Crush
I wanted to be wrong
Final Straw
Drive
Leaving New York
Have you ever seen the rain? (2 verses, sung by Mike Mills)
Imitation of Life
One I love
Walk Unafraid
Losing My Religion

Note:
“Have You Ever Seen the Rain?” was before “Imitation of Life” and “Nightswimming” replaced “Iâve Been High” in the encore (heavy request action from The Checks and their families…).