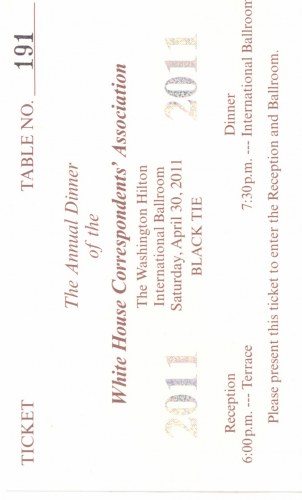 (Update): This article from the New York Observer seems to offer a very good summation of recent events transpiring in DC. Have a look at The Situation and the Story and read our original post from yesterday just below:

Although the band is not touring this go-around, there is still some traveling to be done. This weekend Mike, Michael and I had the singular experience of being invited to the White House Correspondents’ Dinner in Washington DC. Michael was the guest of National Public RadioDavid Corn from Mother Jones Magazine. It was a fun, huge, funny, raucous evening and in fact the entire weekend was unlike anything ever, at least in my catalog of experiences. There were 3000 people there, although it seemed like more than that, and we all had to go down the escalator at the same time. The President got in his jabs at various people in the room, and he did so with decorum and grace as well as a bit of the mean streak for which he is not necessarily known. You looked around and saw people from every walk of life–from politicians to journalists to actors to rock stars. Even a snowboarder. Like I say, every walk of life. I would start naming the people we saw and even hung out with, but that would seem showy and as Prince William once told me, never be a name dropper. Just kidding.

The New Yorker party Friday night was at the W, out on the terrace, which for many years back when it was the Washington Hotel was the place for lunch in DC with its expansive view out over Treasury, the White House, the Ellipse and the Monument. It was loud, buzzy and kind of dark– not at all what I was expecting but a lot more fun. A convivial brunch the next day was at one of the grand homes in Upper Georgetown and in the daytime you could actually see people and then try to figure out who they were– sometimes successfully. And part of the whole evening of the dinner itself is a series of receptions throughout the Washington Hilton– Mike and I went to the one sponsored by Atlantic, National Journal and CBS News. There we met up with Michael and hung out with a bunch of NPR people, including Bob Boilen who created and directs All Songs Considered and whom we knew in his prior life in a DC band of a certain era– Tiny Desk Unit (Bob told me he is now doing Tiny Desk Concerts in his office and in the next week or so I can hear The Civil Wars performing live, which thrilled me to no end).

And then the dinner itself started and it exceeded our expectations– ridiculously huge room, interesting people every which way you looked and the humor quotient was very high, from the President, who does not write for Saturday Night Live, to Seth Myers, who delivered a succession of one-liners, every one of them a keeper. Sort of like Anton Corbijn at a photo session. The President’s birth video and preview of The President’s Speech to summations of the GOP field were pretty darned clever and hilarious. And the only reason it was my favorite was because it was Seth Myers’s last joke about the Royal Wedding and how it made him thankful to live in a country where people don’t wear hats like that. Now that’s funny. And Mike and I had the extra treat of sitting with two of the Award Winners for the evening: Michael Berens from the Seattle Times, whose year-long series exposing abuses in Washington state’s elder care system won the Edgar Allen Poe Award for investigative journalism. And Peter Baker also won an award for his New York Times coverage of the Obama Presidency. Sitting with these two journalists and their wives added an element of gravity to the frivolity–good frivolity of course–of the occasion, and it was a real honor to meet these guys and learn about their careers. (In tenth grade I thought I was going to be a journalist, and last night, I got to see the upside to that profession for sure).

It was by now quite late and at least one of us was nearing the end of his evening– me. But we first went to the MSNBC party, where Rachel Maddow was bartending and the cavernous Italian Embassy provided a pulsing backdrop for the all the weary but joyous bonhomie of the evening as it turned toward the home stretch. At least for me– others seemed in full stride and good for them. After what seems like a career of highlights in our nation’s capitol, last night was definitely high on the list and for the invitations from our institutional and personal hosts at Mother Jones and NPR, we are most grateful and appreciative. Wow!

P.S.: here’s a great recap of the evening from the Atlantic.

R.E.M. HQ · 21 hours ago
@remhq
Thrilled to see continuing progress in the movement to finally get recording artists paid when music is played on the radio https://t.co/1IL6Fw87vz #MusicFairness
View on Twitter
11
45