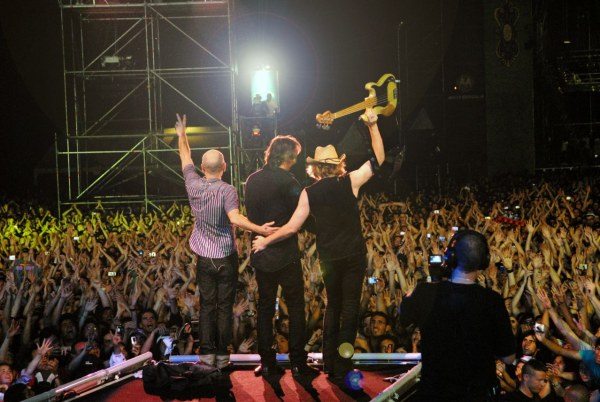 It was quite a night in Santiago:

I really admired the band for the show and their ability to pour themselves into the music for the moment, especially as focused as all of us are on the election. We all watched in the hours before the stage time thanks to the CNN US feed that our friend Carlos (the Chilean promoter) had arranged in the catering area backstage. The guys wanted to know updates as we went along and seemed to have some special songs to play if the expected Obama victory materialized–so I stayed in the HQ office switching back and forth to various go-to sites: DailyKos, Talking Points Memo, Fivethirtyeight.com, Nytimes.com, msnbc.com and CNN. I enjoyed passing along the news of Ohio to Obama from the side of the stage, and Peter even started Neil’s chords from Ohio. During the encore break, the networks had not yet called the race due to poll-closings in the west, but with other Red states falling the Dems way, we knew it looked very good and was all but over. After the Supernatural Superserious/Losing My Religion couplet, Michael motioned me onstage with my computer where I had the Huffington Post screen proclaiming President-Elect Obama!! and a wonderful picture of him. He asked to me to tell what I knew of the race, I did, and the guys broke into a little set of celebratory songs from their career–I Believe, Radio Free Europe (first time all tour–they seem to save it for really special occasions!) and Cuyahoga. The crowd of course loved it and there was a delirious and infectious excitement in the air as OBAMA shirt-wearers cavorted onstage at Michael’s invitation–adding sort of a surreal element to an already-unbelievable moment.

After the show we all gathered with 50-60 people backstage for the All Over But The Shouting part of the evening, including the official projections that BARACK OBAMA WILL BE THE NEXT PRESIDENT OF THE UNITED STATES! Tears were shed, strangers were hugged, throats were lumped, texts and calls were exchanged around the world. . . just like where you were watching with your friends and family. It didn’t matter where we were; it was a magical and transcendent moment. I will leave friends and bloggers a lot more insightful than me to put it into better words, but we are all so proud of America for doing this, as the Economist put it, for taking this chance–the nation and world will be a better place because of it. Our new President is up to the challenge of the serious work ahead. And he will need a lot of help.

Not that many hours later, and we are now on a loooong flight (with connection) to Brazil for shows the next week or so . . .our first shows of the post-Bush era. We are all worn out . . . . (it’s the end of that world as we know it ) but it feels fine.

p.s. One very important detail, especially for all of us Georgians out there– the Georgia US Senate race has gone into overtime– Jim Martin is as fine a public servant as you will ever find, and he is in a runoff with Saxby Chambliss, who is mainly famous for the unbelievable (and sadly effective) ads 6 years ago conflating Senator Max Cleland with Osama Bin Laden (click here to watch it). It is the only race left in our global village. As longtime friends and supporters of Jim Martin, we urge anyone not already involved in his campaign to check out his information and consider donating — he will be outspent by the Republicans, but with the ground game and momentum generated so far, maybe just maybe prevail in the runoff (and he was 20 points down in the polls a few weeks ago)… Go Jim Go! We need more like you in the Senate!