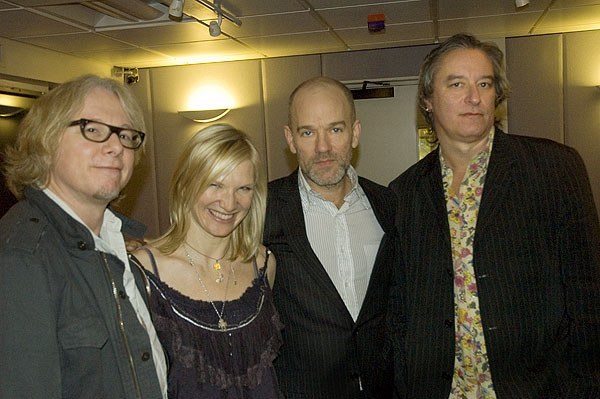 Well another strange thing we lovingly call a promotour has come to an end.

Starting in Austin a scant 3 weeks ago (Stubbs at SXSW), R.E.M. has blazed many a new trail through Europe and the States seeking out opportunities to play their music and build awareness for their latest album (ACCELERATE). In case word had not reached you yet, it was released everywhere except Australia and New Zealand by this past Tuesday, April Fools’ Day. Down Under, as always on a more relaxed pace, waits til Saturday to release it.

Anyway, promotours are kind of like tours, except you don’t really play shows per se, except when you do, and even then they are in a different kind of setting like a computer store or for a charity with other cool bands . . . but the main idea is to do some performances for radio/television/internet, all geared toward spreading the word about the new record. We did that, and we had some fun with it too, which helps make up for the insane pace and demands placed on the human body.

Among the highlights for me personally:

-the Jo Whiley “Live Lounge” session and the Zane Lowe “MTV Gonzo” interview the guys did with this pair of smart, funny, music-hip Radio One presenters in London. On the Live Lounge, the format is for the band to play a stripped-down version of the single, as well as doing a cover song by another current artist. Supernatural Sounded great Takeaway Show-style, as did the song “Munich” by Editors originally produced by Jacknife Lee. And the banter with Jo was fun as always, as it was with afternoon presenter Zane for his irreverent show on MTV. That was some good promo and the kind the guys enjoy– music-centered and, as Michael says, “what we do…” Made me want to hear some more Editors.

-Stubbs, the band’s first time at SXSW (although we have all been to the conference before in some form or fashion and we all love Austin for obvious reasons) and the band’s first time to play a barbecue joint as far as anyone can remember . . .the show was webcast by the visionaries at NPR.org and that way people everywhere got to hear it. It was a beer-soaked, balmy night in the backyard of the legendary joint. Fun stuff.

-The ICA: R.E.M. as Art Force exhibit over Easter weekend, a very well-chosen selection of some of the photographic highlights of the last 28 years. Anton Corbijn, Jacknife Lee, Vincent Moon, David Belisle and Chris Bilheimer were all there too and then Michael and Vincent did a great Q & A session that was a lively and engaging discussion of the past year’s collaborations between Vincent and R.E.M. (Ed. Note: Chris Bilheimer and Michael collaborated on the Special Edition for ACCELERATE which included a Vincent Moon film, Six Days: The special package is housed in a specially printed clear plastic case containing a 64 page booklet with all the lyrics to the album. This booklet has a raw sewn binding intended to disintegrate over time. Once the pages come loose, they can be arranged to create a large poster. The package also contains a bonus DVD of the film 6 DAYS. This film was shot over several months by the filmmaker Vincent Moon, and documents the birth of the songs in Dublin and their recording in Athens. It is one of the best behind-the-scenes films ever made about the band. The DVD also contains two b-sides Airliner and Red Head Walking. The Royal Albert Hall concert for the ICA, broadcast by BBC Radio2 rounded off a wonderful day of art and film and music in one of the centers of R.E.M.’s world since those early shows in November of 1983 at Dingwall’s and the Marquee.

– The Sports Bar Mike and I found in the middle of the night in Berlin (Andy’s), where we sat thrilled to be watching UNC’s thumping of some competitor on the way to another championship. Go Heels!

-the band’s first appearance at a computer store, but not just any computer store mind you– the Apple Store on Regent Street is the busiest in the world we are told and it buzzed that night as the band played a concise, 45 minute set for fan club members, contest winners, people who had figured out a way in. . . the show included most of the new songs from Accelerate, but also gems like West of the Fields and Auctioneer that hadn’t been heard since Dublin; The show will eventually be released digitally and we already have heard a wonderful mix of the show done by ACCELERATE engineering wunderkind Sam Bell.

-New York City, where the band did Rockline and the Today Show within about 9 hours (including naptime!). TODAY, even considering the earliness of the hour, seemed a lot more fun this time, and we heard it sounded and looked great on tv. But the coup d’grace of the promotrip was the next night when the band achieved one of those career milestones by playing (first rawk band to ever do so–another first!) on the Peabody Award-winning Colbert Report hosted by Stephen Colbert. Right up there with their Thanksgiving turn a few years ago, on The Simpson’s, this was right up there among the game-changing, even life-changing moments that one hopes to live for someday. If you haven’t seen it, please check it out: Colbert Report. A good time was had by all. Next time we are getting the guys taller stools!

Well, that is about it from the tail end of the promotour. We now have a little break time before we reconvene in Vancouver in late May for the start of the tour proper. And speaking of that, tickets go onsale this weekend all over the continent Check back here at HQ and of course, check local listings. And beware the scalper sites– they are selling tickets that don’t exist yet so the old buyer beware applies more than ever. DON’T BUY

See you in the coming months, and happy acceleration everybody,

p.s. The Athens pre-sale for Atlanta tickets is going on right now. We have done these since 1995 for the Monster tour so local fans can have a crack at tickets before they go on sale to the masses in ATL. Special thanks to our friends from Live Nation Atlanta for making it possible once again.