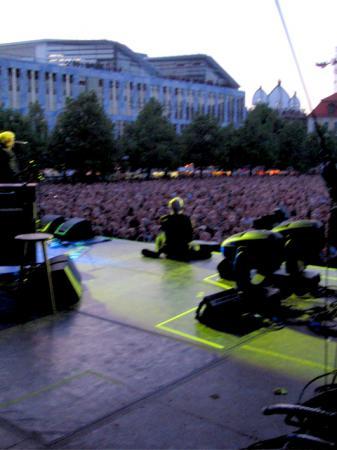 We are at a Formula One racetrack somewhere near Cologne, where the annual
Rock am Ring/ Rock im Park Festivals begin tonight. Unlike other European events, which we have done before, this is our first appearance at Germanyâs big weekend out and the guys are psyched to be playing here with so many other great bands. Tonight will be the first of 3 in the next 9 that we play with Green Day, a pairing that should make for some tremendous shows.

The first few shows, in Spain last week and in Magdeburg Wednesday night, went off great and made a lot of people happy with some ânew/oldâ material: Me in Honey and Leave. Now this weekend we do these huge festivals that are real institutions in the heart of Germany, then to our own show in Graz, Austria and a short break before the Italian shows and Isle of Wight next weekend. One of the fun things about playing here in Europe in the summertime is the way each show is different: in front of a raving Spanish crowd in a parking lot one night, a few nights later in front of a huge ancient church on a German square, and then a center of town show in a part of Austria we have never seen and the Olympic Stadium in Rome…and that is just the first few shows. Yes it is tiring, but it is also fun and exciting.

Wanderlust is shaping up as a cool summer single for the UK in a few weeks and we have unearthed some stellar b-sides that will be detailed elsewhere on HQ soon. Suffice it to say, it will not disappoint longtime fans, except perhaps for people hoping for live versions of Losing My Religion and Country Feedback! Those will not be included.

And the recently announced âLive 8â shows should be interesting. R.E.M. will do a short set in Hyde Park, then fly off to the previously scheduled St. Gallen Festival in Switzerland. Not the easiest thing to coordinate, but it seemed to the band like an opportunity to really help out and after our recent experiences in South Africa, all of us are more attuned than ever to the massive needs and challenges facing that part of the world. And we really respect the hard work going into organizing all these shows around the globe to pressure world leaders to pony up more aid for Africa…so July 2nd should be a real memorable if short chapter for the band.

Late for the festival so I will sign off from this hurried Friday update.

p.s. The show from Rock am Ring tonight will be streamed on the web here. So tune in at 11 p.m. German time/ 5 Eastern.

p.p.p.s. One other thing I want to mention is the coolest new merchandise item we have had in years: practical, functional, attractive wooden trays… (and the brainchild of Michael). A tray– like the kind in your house that you use to eat while watching television… wooden and made in Sweden. We have made it available in the store so you can check it out here. (It will be available in the U.S. store very soon.) You will be glad you did!