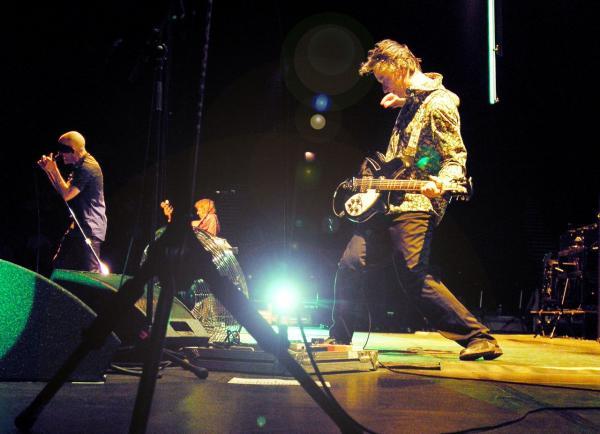 We have a couple of days off before the final two shows of this part of the tourâ in Adelaide Wednesday night and Perth on Friday, then home for a spring break and a chance to rest, revive and get ready for the summer fun in Europe starting in Spain in late May.

Everybody did something different on the two days off…Peter is driving with a couple of the others up to Adelaide, taking his time, going through some gorgeous scenery from all accounts, and enjoying a little time away from the big cities that we otherwise spend time in; Mike is chilling out in Melbourne an extra day; Michael and I came back to Sydney for him to appear on Enough Rope With Andrew Denton, a very cool talk show that airs tonight and was a lot of fun for Michael, Andrew and the people in the studio audience. They said we could have some of the footage to link on our site, so we will try to post that in a few days, as it was an excellent and revealing interview, and a laugh fest too. Andrew Denton is a charming, collegial host with a disarming and relaxed style that got a conversational, personal response from Michael, and now we have a night off in Sydney, one of the great cities anywhere with about as beautiful a park/gardens on the waterfront as any I have ever enjoyed.

Everybody will meet back up in Adelaide tomorrow night, where we will commemorate the birthday party on April 5th, 1980, that started all of thisâ¦pretty amazing, really.

The shows have been going well, with a few surprises every once in awhile…last night, both Pilgrimage and Turn You Inside Out made it back into the set, to the delight of a lot of fanclubbers and others up front; when I ran into a guy at the airport today, he approached me very politely about approaching Michael. When he asked how things were going, I told him, âFine but we are all a bit tired.â He said âI am too…and I have just been following this part of the tour.â Seems he took a couple of weeks off work and has seen all the New Zealand and Australian shows. Pretty impressive and of course, he is right–it is tiring…He also said that some of the nights he had been in the fan club seats upfront, but that for one of the Sydney shows, he sat further back and was able to appreciate the full effect of the screens and how much they add (which confirmed what I have thought all along).

Anyway, all is fine, and it is wonderful to be back in this special part of the world. When I took a walk away from the venue yesterday afternoon before the Melbourne show, I walked by the Myer Music Bowl, site of our last concert in the city more than 10 years ago, and the only place Bill Berry voluntarily relinquished his drums for a song… Jim Courier, in town for the Australian Open, played on Wichita Lineman, the Jimmy Webb /Glen Campbell standard, and this time, our show was in Rod Laver Arena, site of the epic five-set match Jim played against Pete Sampras the night before and which Mike and I were lucky enough to attend…those are very vivid memories.