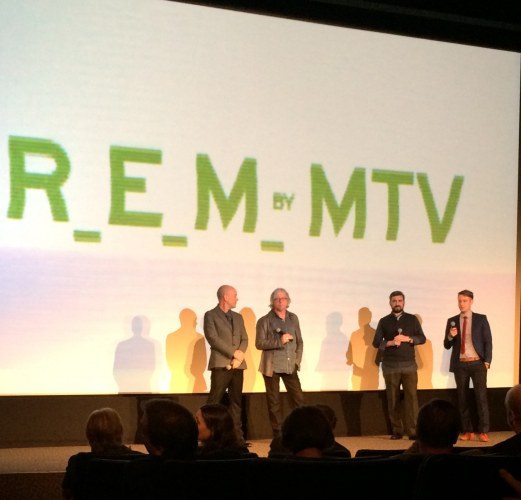 Last night saw a special screening of R.E.M. By MTV in New York City with many friends and colleagues from across the years all enjoying this tremendous documentary, which chronicles the band’s thirty years of activity on the various MTV and associated networks all over the world . . . the stellar team of Alexander Young and David Leopold, producer/director and editor of the film, were joined for the Q&A by Michael and Mike, both of whom were happy to re-live so many great moments of their career amidst so many friends. And soon we are excited to announce some theatrical screenings in the next couple of weeks before the release of REMTV on November 24th. From Athens GA to Berlin and London to NYC and Chicago– please check local listings and R.E.M. HQ social media for more details but be on the lookout for it–it’s a powerful, musical, fun and funny look at the band through the cameras of MTV and includes scenes familiar and unfamiliar–really, it’s not to be missed and the documentary is also available on the REMTV package of course.