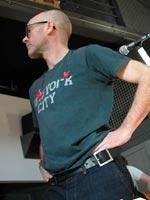 Hard to believe the tour is only 6 weeks away — in some ways it feels like it has already begun! I am on the plane home from Vancouver (not nonstop–oh well) having just spent a few days up there with the guys. Several things are going on: finishing up the new material for the best of — got to get it done before pushing off for the shows in Europe; rehearsing with the expanded band (the ancillary performers Scott, Ken and Bill Rieflin) to re-learn and prepare a lot of songs for the tour, and otherwise prepare for the upcoming hectic phase — artwork, video, merchandise, lights, personnel, etc , etc. It is all coming together great (we think), and by the time we hit the Netherlands, we should be off and running.

The rehearsals are in the big room of the studio where all 6 guys are spread out in a way approximating their position on stage over the years, except Bill now plays standing on his head–a neat trick, a heckuva drummer and all-around talent to behold. An array of every stringed instrument ever invented (at least the ones owned by the band over the years) surrounds them, thus making possible any arrangement of any song at any time, so don’t be surprised: a lot of material is being readied, including some I haven’t heard in a long, long time. Murmurs.com recently sent us a listing of the last time R.E.M. performed basically every song they have ever recorded–it was pretty amazing and wonderful that people had taken the time to research it, and we were all appreciative, amused, and helped by having the list. So thanks Ethan and all at murmurs, especially whoever put together that list. I won’t give away specific titles (I like surprises too much for that), but I will say that songs from each album are being rehearsed, so I am guessing it will be a varied and dynamic experience as it unfolds night by night.

The warmup shows in Holland and England (in Utrecht, Amsterdam, and London) were up and out pretty fast and thanks to the internet (email and remhq) we were able to get mostly serious and agile R.E.M. fans into those smallscale shows. At least that was the aim, and I think the result. It is a constant and evolving endeavor to figure out better ways to do the e-commerce part of ticketing, and frankly, much more complicated and nuanced than one would imagine, but we are striving to whenever possible reward fan club members and online fan community members with early access to tickets. It isn’t perfect (we know, we know) but it is working somewhat. The scalping/touting situation seems endemic and implacable and makes us sick too, but it seems never to go away–for us or anybody else either, but we will keep trying–I promise.

There are some recent photographs from the studio and rehearsals somewhere around here (see photos). Also Michael wanted me to link a great website we came across: borowitzreport.com– it is pretty hilarious, so check it out. It beats watching Fox news that’s for sure. I guess that is about all from here–ready or not, R.E.M. is about ready
to take off again. Should be a great summer, and we hope to see you soon (by the way, we are still working out the opening of the North American part of the tour just before the announced show at Bumbershoot in Seattle on September 1). Stay tuned, and thanks for your patience (and hospitality) Vancouver.