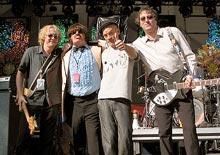 On a late night flight on the way to Denver, I realized that if I don’t write down some of the things about the rest of the west coast swing, I probably will forget them. It has been a little hectic, but fun, as usual, but moreso, as Southern California always quickens the pace a bit.

Some highlights of the California swing: San Francisco–definitely one of the best shows of the whole tour. Up there with Locarno, Dublin, and Geneva, in my opinion. From the minute the band walked on stage there seemed to be a heightened energy in the place, and the guys responded with an amazing set that included a few old chestnuts like Welcome to the Occupation, Fall On Me, and So. Central Rain, and then lo and behold Mike stepped center stage and they went into a furious version of Rockville which Michael said they hadn’t performed since about 1981; he also said that someone on the internet would certainly correct him, and sure enough, late that night, murmurs.com posted Valentines Day of 1984 as the real “last time” it was played. Throwing in the occasionally-played-but-still-special unrecorded Permanent Vacation in the encore was a great final surprise. Shoreline has a lot of great recent history for R.E.M.; it was the scene of the band’s resumption of the Monster tour in 1995 after Bill’s brain surgery two months prior. And the Bridge School Concerts in both 1998 and 2001 were amazing experiences for all concerned. And last Saturday night with many friends and family in the Bay area for the concert, we added another memorable night of R.E.M. in San Francisco.

San Diego–San Diego Street Scene, the second of three festivals on the North American part of the tour (Seattle’s Bumbershoot and next week’s Austin City Limits Festival being the others), was the venue for our visit–it is a street festival that has grown from a one block block party twenty five or so years ago to its present status as covering many square blocks of downtown, essentially taking it over. The site has a rough and ready feel to it, and it was kind of an early stage time, just after seven. Eddie Vedder continued the tradtion of outstanding lead singers to jump on the stage with the band, lending a hand to the chaos at the end of End of the World. Large smiles all around. A quick visit, as after the show it was time to head up the road to…the main event: Los Angeles.

Los Angeles–Because it is the home of the entertainment industry and the list of invited guests is always a massive one, shows in Los Angeles are known to have a certain kind of energy (or lack thereof). Not this one. The Hollywood Bowl is one of the absolutely classic outdoor places to play anywhere–the night was perfect with a huge full moon rising over the audience and a temperature which made a sweater or jacket a good idea. The crowd really got into the show very early, from Begin the Begin on and the band’s energy was sustained throughout–I am so glad that the Fan Club and Music Today system yielded the front few rows of hardcore fans. And a veteran industry friend told me, “Nobody ever stands at the bowl.” Many did this night, and all were treated to a varied set with some moments of poignance (Find the River for Warren Zevon), Electrolite with Wilco’s occasional violinist, Jessie Green, and a less poignant but oh so El Ay moment–halfway through Man on the Moon, perennial lounge act Tony Clifton shambled on stage. The band played along and Michael was quite gracious actually (especially considering that he was being thrown to the floor and doused with water). And as usually is the case when Clifton is around, something ticks him off and things get a little out of control. Order was eventually restored, the song finished, and nobody got hurt badly. And in a weird way it was all in good fun–and a bizarre twist. Anyway, it was a fine, spirited rocking show, and a lot of people, who live and work in Los Angeles, got finally got to see the band perform what they had been hearing reports of from the European shows this summer. Read Robert Hilburn’s concert review in LATimes.com (must be registered) by clicking here.

Las Vegas: Twentieth anniversary of the Thomas & Mack Center, a show that started with World Leader Pretend, and included the rarely played Sitting Still and another Rockville. Those are the highlights for me. Vegas always eludes me somehow.

And now it’s off to Denver, where we have a night off, the two shows at Red Rocks, and this show gets the Dublin magnet award as many friends and family have chosen this one to come out for. Cold for this time of year, well into the swing of things on the tour. Bad Day is out at radio, coming soon to video–check out Morningteam.com. The Tim Hope video director team is quite a clever bunch and the site gives you some idea of the video’s, shall we say, “point of view.”

Anyway, on we go. Come see a show. The guys have never sounded better, and you never know what the heck they’re going to play next.