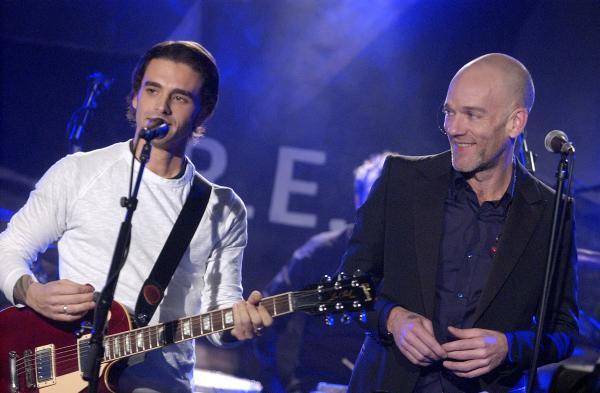 It is nice to be home after much of the year away.

Michael has just finished up his extended press tour after the bandâs promo tour after the tour itselfâ¦all in support of “In Time,” which seems to be doing great most everywhere. An essential Christmas present; a great collection of the bandâs arguably best ofâ¦ and all that. And not to mention the two new songs with brilliant new videos–âBad Day,â which everybody has hopefully seen, and just-released âAnimal,â soon to be on a television or computer screen near you. Stay tuned.

A few notes of randomness:

Michaelâs performance with Dashboard Confessional, to be aired on MTV2 in the New Year as part of their new âAlbum Coverâ series, was quite a revelation. Dashboard had picked 1992âs “Automatic for The People” as their âinfluential album to cover,â and they did terrific versions of many songs off that album, including several R.E.M. hasnât performed in awhile like âSidewinderâ and âTry not to Breatheâ. The venue was Arleneâs Grocery, a cozy bar on Manhattanâs Lower East Side, and the audience was composed of adventurous, die-hard Dashboard/R.E.M. fans. Michael joined in for âDriveâ plus Dashboardâs âHands Down,â and both sounded wonderfulâspine-tinglingly wonderful. Glad itâs on film–should make for a great t.v. show. Good job MTV2. Michael and R.E.M. are honored to have been a part of this cool event.

A side note on the Dashboard/Michael collaboration. Over the years, R.E.M. has supported the work of People for the American Way who is, this week, kicking off its annual amazing online auction. Michael and the Dashboarders signed a set list for the auction, and R.E.M. also signed a limited edition poster from the Avalon show. For more, please vist pfaw.org.

Mike ended up playing on most of the Tell us the Truth Tour with Billy Bragg, Tom Morello, Steve Earle, and Lester Chambers among many others. He reports that it was highly worthwhile, lots of fun, eye-opening and educational. We hear good reports from many who attended and the shows seemed to go over great. To learn more about some of the important issues raised on the tour–media consolidation, fair trade, etc–please visit tellusthetruth.org. And remember–only 48 weeks till November 2nd!

In case you haven’t seen our earlier post on this, Michael is currently on the cover of Filter magazine. Check it out by visiting filter-mag.com.

âAnimalâ will be released as a single in various formats in Europe and elsewhere in early January. It will have some cool live b-sidesâlikely highlights and chestnuts from recent touring activities.

âPerfect Square,â the DVD of the concert we filmed in July in Germany, will be released in the spring. It is among the best live footage ever of R.E.M., directed by the estimable Julia Knowles, who captured a rockinâ show in spectacular setting–should be highly necessary for the committed fan. And speaking of compelling live footage, have you seen the bonus material on âIn Viewâ–the best of video collection? It is three songs from the 2001 Trafalgar Square footage from the South Africa celebration honoring Nelson Mandela. It is special–a nice glimpse of R.E.M. in another extraordinary setting. Check it out. And speaking of DVD releases, the classic mid-80âs documentary on Athens music, Athens, Ga.-Inside/Out has just been released. For more, click here.

Enough from here, Iâve got mail to open.