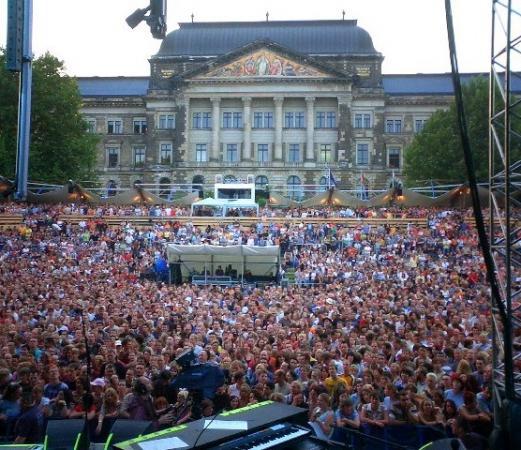 We have had quite a week…

Horsens, Denmark was quite a revelation. A 2-hour train ride from Copenhagen, near Aarhus in Jutland, it seems Horsens has been using concerts as a tourist/destination attraction. From what I am told, since the main prison of the country is there, some enlightened city leaders decided to change people’s perceptions of their town by aggressively pursuing concerts. So in the past few years, everyone from Paul McCartney to Elton John to Bob Dylan have played either the stadium or the concert hall there, turning Horsens into quite a concert destination for the whole country. Well, we turned up and literally the whole town was waiting…with R.E.M. special meals in the cafes, R.E.M. music and posters evident in the shops and maps from the trains station to the stadium. My favorite moment was hearing a cover band playing acoustic versions of R.E.M. songs on the main shopping street. As I walked away from that, hearing Man on the Moon and Losing My Religion (decent versions to boot), I was approaching the stadium where the band was playing Imitation of Life …indeed. One nice thing about playing Denmark is we get to hear She Just Wants to Be, a rare treat and a powerful part of the encore. Rockville was a surprise addition too. I came away with an appreciation for a good story of a town turning to the arts as an economic generator…more places should!

Next was a festival at Nijmegen, Holland, then two intense shows in Bonn and Dresden followed. The German shows were, along with the many we have done there all year, a lot of fun in some poignant settings. In Bonn, the stage was squeezed into a plaza between two museums; in Dresden, the stage backed up against the Elbe River with a spectacular sunset over the spires and imposing skyline of that beautiful city. The shows were all very memorable and exciting, with wonderful, vocal and appreciative crowds.

So now we are London awaiting all that will unfold tomorrow and making final plans for our crazy day of a short set for Live 8, then a quick dash to a 10:30 stagetime in St. Gallen over in Switzerland. Should be wild–hope it works. Yesterday, flying in from Germany, I looked out the window on the approach to Heathrow, as I often do, and marveled at the river, the Houses of Parliament, the parks…then I saw the site in Hyde Park where Live 8 will take place tomorrow and the R.E.M. concert will be next Saturday. I imagined what it would look like with so many people there, how it would feel from down there, how very small it is, really, in this massive city…a little moment of wonderment.

Michael looks great on the Timeout London cover, as does the whole band on Radio Times and Uncut. It is really fun to be here and hard to believe we are only a week away from the end of the tour.

Tune in tomorrow…it should be quite a day…and thank Bob Geldof for having the idea and many others working like mad to make a difference.

R.E.M. HQ @remhq
1 hour ago
. @JasonIsbell's stellar cover of "Driver 8" (from his forthcoming covers' compilation, Georgia Blue) jogged our memory of another great version of the song from @HootieTweets 2000 covers' LP, "Scattered, Smothered, and Covered."
https://t.co/TaVeFE5ny7
View on Twitter
6
90