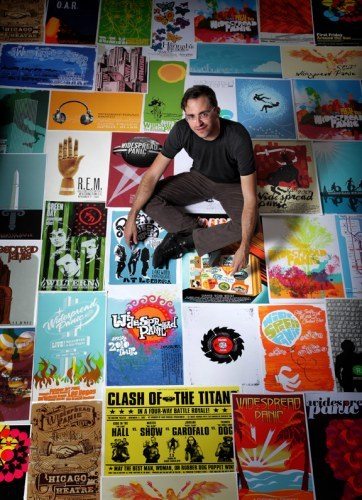 Congratulations to Chris Bilheimer and his frequent collaborators Lance Bangs, Dan Donahue and of course Michael Stipe, on the opening of Chris’ career retrospective exhibition at ATHICA in Athens last night.

The show runs through Monday, so hurry down to see a stunning collection of everything Chris has ever done– the room is full of posters, album covers, FLAGPOLE covers, single sleeves, backstage passes, tour programs, acres of colorful, lively art, all designed by our prolific and super-talented art director of nearly the last two decades when Michael started his alliance with a UGA art student named Chris Bilheimer. It was high-time Chris put it all into a display and the chance to do a three-friend show with Lance and Dan provided the perfect occasion. Friday’s show at CINE focused on Lance and Dan and their films, and it was its own slice of brilliance and inspiration. Saturday night’s ATHICA show was all Chris, with friends, family and fellow Athens artists all marveling at the sheer quantity and bulk of all that Chris has done over the years– he must have averaged more than one piece of art a day for all these years and the result was overwhelming. Way to go Chris– way to go Athens. What a wonderful

weekend to be in town.

What a night! Friday night at Cine featuring Chris Bilheimer, Lance Bangs and Dan Donahue was a trio of talent in full force! The three old friends together showcasing the last twenty years of work was a fun walk down memory lane and a reminder of how talented these guys are and continue to be. They are wonderful friends to each other, fierce supporters of the Athens art community and although everyone always talks about Athens as a music town, maybe we need to be talking about Athens as an ART town! These guys have proven if you set your mind to something, however obscure, it can work!

Chris’s work grabs the attention of a vast range of tastes and ages…my 2 children were immediately drawn to his use of Lego characters for a band poster. I find most his posters very pleasing to the eye and his printed invitations that resemble letterpress are impressive via their simple beauty.

I have had the distinct pleasure and unique opportunity of working next door to Chris in the R.E.M. office for nearly 13 years. As the band’s fan club director and de facto web content manager, I have worked closely with Chris on countless R.E.M. fan club newsletters (roughly 50 I’m guessing), blast email newsletters, hundreds if not thousands of web articles and banners, twelve fan club Christmas packages, and who knows what else. Let me get one thing straight: he did ALL the visuals and graphics. One thing I’ve learned about Chris in all these years is that he is as hard a worker as anyone I’ve ever known. Sure, his talent is up there with the best (lest we forget the guy has been nominated for Grammys on a few occasions and his work has been anthologized in numerous design books that would look great on your coffee table), but it didn’t strike me JUST how hard Chris has worked all these years until Saturday night when I stepped into ATHICA to check out his show along with my ten-year old son. We were both blown away. Trust me: words like “cool… that’s awesome… and I want one of those” are words I’ve heard my son say before but not at an art exhibit. Before entering, I assumed a couple of walls at best would be covered with Chris’ things, but the sheer abundance and overall magnitude of his output is something staggering to behold. Wow. Surely he has had a few elves in his employ cobbling away at these things at night while he sleeps. But then it occurred to me: he doesn’t sleep! Every wall, every nook and cranny, not to mention the floors, were covered with something: t-shirts, backstage passes, invitations, tour posters, tour programs, album covers, CD and DVD covers, hats, pamphlets, laminates, backstage passes… Many of these things were recognizable to me since I’ve seen a lot of them at their incipient stage of development, but seeing it all together– as an immense and colossal visual cornucopia– tested the limits of my imagination. Congratulations CRB. We’re all proud of you. It won’t be the same around here without you next door, but I have no doubt that you will have a chance or two yet to add a few more things to your portfolio: at least 3 to 4 more walls worth I’m predicting!

Probably my favorite moment of the night was, while walking through the show with Michael to see all the work we have produced over the years, I got to show him a t-shirt I had made in high-school of the Chronic Town ep cover, which I had crudely airbrushed in art class. It was nice to embrace the embarrassing revelation of my early fandom and be able to laugh about it in the context of what my future with the band was to be.