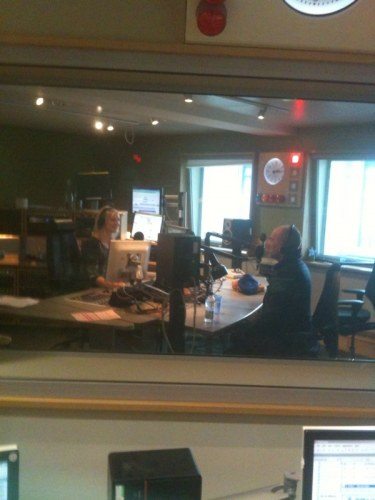 Michael concludes a mad dash of press around Europe with a full day here in London– right now we are at Western House of BBC Radio where he is doing some interviews with Radio 2 and 6 Music. Tonight he is presenting several of the films made for the songs on COLLAPSE INTO NOW at the theatre for BAFTA in Picadilly so that should be fun.

Since Monday we have been in Milan and Berlin where Michael talked to radio, TV, magazines, newspapers and so forth–all in all a good week of spreading the news about the record and the films. And next week IFC.com and Sundance Channel are hosting a similar event at the SXSW Film Festival in Austin– Michael’s idea to commission independent films for each song off the record has sure been a fun thing and the films I have seen are as different as they are interesting. Tomorrow, Michael will make a guest appearance on Radio 2 with Dermot O’Leary at 4:15 PM UK time.

Although the time in London has been too short, as usual, I am really enjoying the springtime and week of release in one of R.E.M.’s traditional homes away from home.