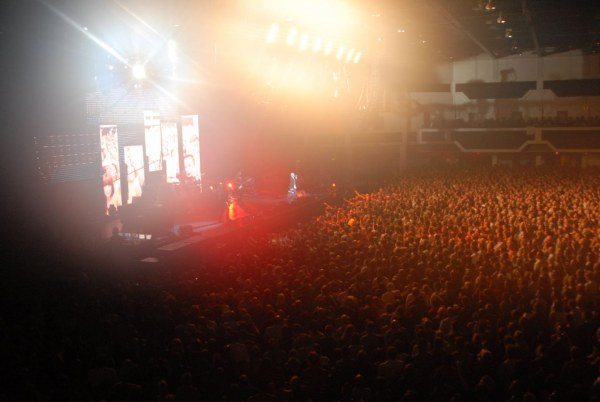 Tonight the band is playing the latest in their series of UK cricket grounds and rugby stadia– tonight’s installment: The Rose Bowl of Southampton. Energetic and boisterous crowd, not unlike those we saw over the weekend in Manchester and Cardiff, and we all look forward to the show at legendary Twickenham on Saturday in London. We are in London a few days around these dates and that is never a bad thing. In addition to the Twickenham show, Michael and David Belisle are having another book signing for David’s tremendous book of photographs, R.E.M.: HELLO, this Friday night at Waterstone’s in Picadilly. The store is advising everyone to get there early as it’s first-come, first-served and the queues at previous signings in LA, New York, and Amsterdam have been very long. You can find out more about the store and the book at this LINK. The signing begins at 6PM.

After the Southampton show tonight, we head over to Paris tomorrow for the Rock En Seine festival, which the band is headlining the opening night, and a special bonus will be our chance to see Vincent Moon for the first time in quite a while. Speaking of Vincent, he is featured in a widely-read AP story on Music video 2.0 that quotes Michael and is worth READING. The band is really enjoying these shows, and it shows in the setlists, which of late have included surprises like Pilgrimage, Exhuming McCarthy, New Test Leper, End of the World, Heron House, and Pretty Persuasion. And they have played Fall on Me a good bit lately, always many people’s favorite song of the night in these breezy late-summer evenings. . . . if not Nightswimming. Everybody is still having fun, band and fans, and we are grateful for that.

If you haven’t visited the tour site, take a look. It’s pretty amazing seeing all of the photos and videos the fans are posting. Very cool that technology has afforded us all the opportunity to follow the shows from the comforts of our laptops…