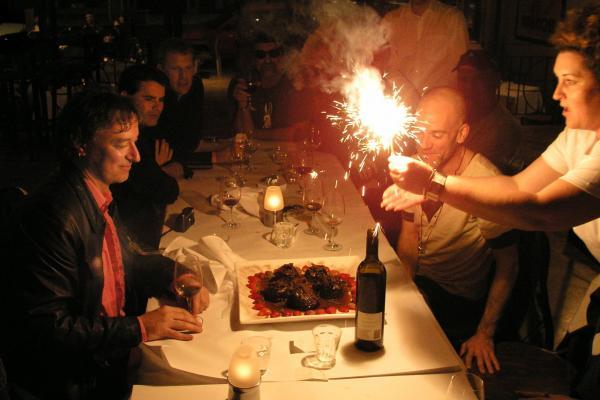 R.E.M celebrated their 25th anniversary yesterday in Australia during a day off in Adelaide. The celebration included dinner, toasts, and a lot of reminiscences about the night when it all started back on April 5th, 1980, at a birthday party in Athens, Georgia. Meahwhile back in Athens, we received a special phone call. Although the guys were asleep at the time due to the 17 hour time difference when he called, Bill phoned in to say “hello” and to pass on his well-wishes to Peter, Mike, and Michael for reaching such a memorable milestone. Thanks Bill!

To celebrate the band’s anniversary, Flagpole has posted two articles online at Flagpole.com, one of which looks at that seminal night in April 1980 and the other of which chronicles the band’s storied musical evolution.

Murmurs.com, not to be outdone, has put together an amazing tribute to the band at thankyourem.com which is a must see. Thanks for all of your efforts Ethan and everyone else involved in creating this tremendous tribute to R.E.M.