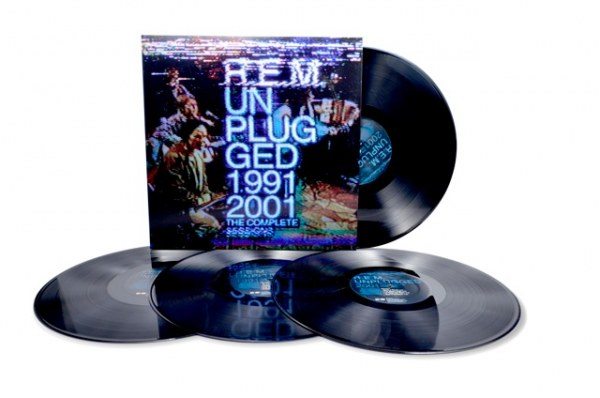 R.E.M. delivered two knockout performances on MTV’s GrammyÃÂ® and EmmyÃÂ® award-winning “Unplugged” series, the first in 1991 and the other in 2001, giving them the unique distinction of being the only band to headline the series twice. Surprisingly, audio from both shows has never been available, making these some of the most demanded music in the R.E.M. vaults. That will all change on Record Store Day, April 19th, 2014, when Rhino releases both performances as a limited edition, four-LP set. The collection includes every performance from the original broadcasts, as well as 11 songs that never aired, from the storied collection of the band’s MTV appearances.

Unplugged: The Complete 1991 and 2001 Sessions is packaged in a four-pocket gatefold and will be available exclusively at select independent music retailers on April 19. For a list of participating stores, please visit recordstoreday.com.

The “Unplugged” performances are sonic snapshots that capture the band at important points on its journey from alternative-music progenitors to international stars that have sold more than 85 million albums.

Drummer Bill Berry, guitarist Peter Buck, bassist Mike Mills, and singer Michael Stipe recorded their first “Unplugged” session in 1991, while riding a growing wave of success that began in 1987 with the commercial breakthrough of DOCUMENT. Much of the performance spotlights songs from the band’s then-current album OUT OF TIME, which sold over 18 million copies worldwide and was the band’s first #1 album in the U.S. From the album, the band performed “Radio Song,” “Low” and its biggest American hit, “Losing My Religion.”

The remainder of the set list spans eight years of music and touches on five different albums, mixing “Perfect Circle” from R.E.M.’s 1983 debut Murmur and fan-favorites like “Fall On Me” and “Its The End Of The World As We Know It (And I Feel Fine)” with a cover of The Troggs’ “Love Is All Around.” Five songs that never aired can be heard on this set for the first time, including two tracks from the multi-platinum Green — “Get Up” and “World Leader Pretend.”

R.E.M. made an extremely rare second appearance on “Unplugged” in 2001, but this time without original drummer Bill Berry, who left the band in 1997. For the show, the band focused mainly on its 12th studio album Reveal — which came out that year — with performances of the singles “Imitation of Life” and “All The Way To Reno (You’re Gonna Be A Star).” The song selection draws from eight different albums with “So. Central Rain” from 1984’s Reckoning, “Cuyahoga” from 1986’s Lifes Rich Pageant and “Find The River,” the elegiac album closer from the 1992 classic Automatic For The People.

This collection uncovers six songs from the session that were never broadcast, including tracks from Reveal and Up (1998), as well as a haunting and tranquil re-imagination of the band’s breakthrough single, “The One I Love” from 1987’s Document.

Following their debut on vinyl for Record Store Day 2014, both “Unplugged” performances will be released on CD and digitally on May 20.

2. “Disturbance at the Heron House”

* Not included in original television broadcast