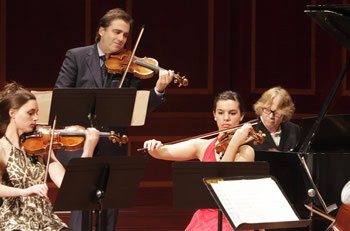 Popmatters.com has posted an intriguing article on the legacy of R.E.M.’s 1995 album MONSTER in which writer Ben Schumer makes the case that MONSTER is one of the band’s best despite its history of having been maligned by critics and fans alike. Is it time for a re-estimation of the record fourteen years on? Are “What’s The Frequency, Kenneth?” and “Strange Currencies” in the elite class of R.E.M. songs? Popmatters makes the case that they may just be… click here to read.

Today’s NY Times gives a shout out to our good friend and co-conspirator Trevor Fitzgibbon, who, along with a handful of other politicos/hall of fame bloggers–Jane Hamsher, Markos Moulitsas, Glenn Greenwald, and Jeff Hauser–have formed a political action committee named Accountability Now with the purpose in mind of holding Democratic incumbents accountable to the progressive principles inherent to the shift in Dem party politics. Read more about their project at Nytimes.com, watch this clip on Cnn.com, and click here to visit Accountability Now’s website to get involved.

And, in case you missed it earlier this week, two of Macon’s favorite musical sons, our own Mike Mills and world-renowned violinist Robert McDuffie, performed “Nightswimming” together on the campus of Mercer University on February 18th. Mike was a surprise guest at McDuffie’s concert in the Townsend School of Music’s Fickling Hall on the Macon campus. Mike and Robert are shown in the picture above performing with Center for String students Lily Squires and Elizabeth Ehrlich.

Finally, with March marching in this month, don’t forget about the R.E.M. Tribute at Carnegia Hall on the 11th. To read more about the tribute, please click here.