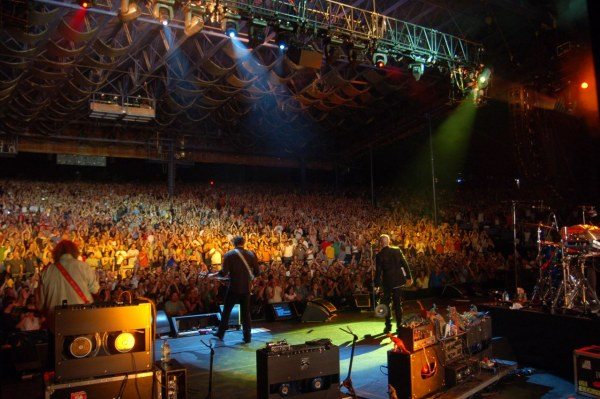 R.E.M. has five shows remaining on the North American leg of their world including two big ones this weekend at the Tweeter Center outside of Boston in Mansfield, MA, tonight, followed by a Saturday night show at Jones Beach in Wantagh, NY. Next week: Philly at the Mann Center on Wednesday, NYC’s Madison Square Garden Thursday (which has just sold out), and the finale at Lakewood in Atlanta next Saturday. Check out the LIVE page for all tour dates and further details and don’t forget to post your photos, blogs, videos, and tweets at the 2008 tour SITE.

Read a great interview with Michael at METROMIX.COM.

Peter speaks to the BOSTON HERALD on the eve of the Boston show as well as PHILLY.COM in this interesting interview which serves as a prelude to the band’s show at the Mann Center Wednesday.

…and in case you didn’t see this interesting article on the resurgence of vinyl posted last week, click HERE to read.

Check out this POST from earlier today on the band’s interview with Jane Pratt on Sirius Radio…tonight–6PM ET.

David Belisle, photographer of R.E.M: HELLO (Chronicle) and Michael Stipe will hold a book signing of copies of R.E.M.: HELLO on Sunday, June 15, 2008 at 6:00 pm at McNally Robinson bookstore on Prince St.

Over the past six years, David has traveled with the band and captured them on- and off-stage; the book features 175 color and black and white photographs, with handwritten captions by the band and an introduction by Michael.

Please note: this event is a signing only, not a reading. Only copies of the book purchased at McNally Robinson will be signed.

Scott and Peter’s side project with Steve Wynn and Linda Pitmon, The Baseball Project, will appear on The Late Show with David Letterman next Friday, June 20th. The show airs at 11:35 ET on CBS. This should be worth checking out in a big way, so stay up late or set your TiVo’s and sleep in…

R.E.M. AUTOGRAPHED GRETSCH GUITAR TO BE AUCTIONED FOR ARTS AND EDUCATION

Also, our good friends at AthFest have a signed guitar (donated by the good people at Gretsch) which will be auctioned off for some really good causes beginning June 18th. Check out this article at ANTIMUSIC.COM for more information about the auction and guitar which is signed by Peter, Mike, Michael, and Bill.