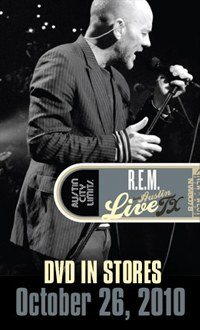 We are very excited to announce that New West Records will release R.E.M. Live From Austin, TX, the latest DVD from the acclaimed PBS Austin City Limits (ACL) television series, on October 26, 2010. Taken from the band’s March 13, 2008 ACL concert, which has been edited into an hour TV show, the DVD contains an extended performance including three songs never aired on the original broadcast. The 17 songs have been re-mixed and re-mastered in LPCM stereo and DTS-HD 5.1 surround sound to provide the highest-quality concert DVD available.

1. Living Well Is The Best Revenge

4. So. Central Rain (previously not broadcast)

6. Fall On Me (previously not broadcast)

15. Imitation Of Life (previously not broadcast)