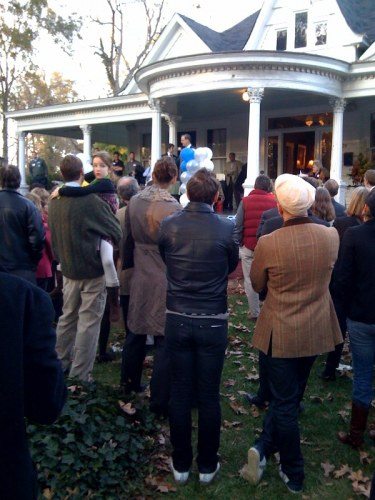 On a crisp Fall afternoon in Athens Sunday, an enthusiastic crowd of Jim Martin supporters gathered at Bertis’ house for a fund-raising event to help elect Martin to the US Senate. The event was hosted by progressives from Athens and surrounding areas, each with a shared interest in furthering the change that has been sweeping American government. Michael, Mike, Bill Berry, and Bertis were hosts, and the event was attended by R.E.M. staff members, band members’ families, and numerous friends and neighbors. It was an exciting opportunity for the band, who just returned back home from touring on November 19th, to get involved in an ongoing political race, given the fact that R.E.M. was on tour in South America on election day.

Martin is currently in a run-off for the senate seat occupied by Saxby Chambliss. If Martin were to win the run-off, Democrats would be one step closer to a filibuster-proof, 60-seat “super majority” in the US Senate.

To help elect Jim Martin, please visit his website: martinforsenate.com. Check out this mention of the rally at Dailykos.com