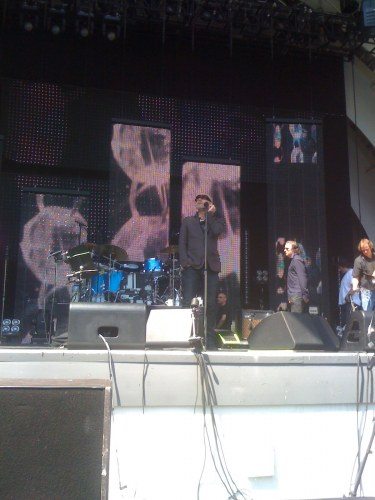 After a couple of days off following their headlining slot at the Sasquatch! Festival, the band returns to the stage tonight at the Hollywood Bowl, the scene of an infamous row during their last appearance at the Bowl in 2003 instigated by Tony Clifton who bumrushed Michael onstage during “Man on the Moon.” Clifton accused R.E.M.of stealing his headlining slot and, after roughing up Michael, received a dose of his own medicine from Peter who tackled Tony and set things right. Let’s hope tonight will be eventful from a purely musical standpoint. Tony Clifton, as we understand, will have his own headlining tour opening in Athens, Georgia, soon, thanks be to God.

R.E.M. support tonight, once again, comes from Modest Mouse and The National who will be on tour with the band throughout the North American Tour.

Other highlights leading up to the show at the Hollywood Bowl:

HERE for some photos from the book signing last night.

These posts are a good lead up to the show tonight:

Check back for an update from LA tonight and be sure to follow the action on REMTOUR as it happens from the Hollywood Bowl, live. R.E.M. next heads to Berkeley for a two-night stand at the Greek Theatre, May 31st and June 1st.