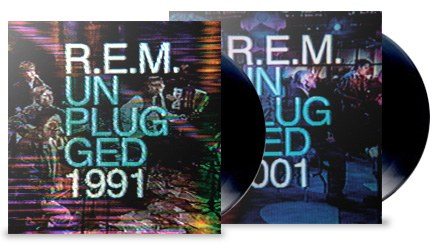 We are excited to announce that the band’s two landmark MTV Unplugged performances (1991 & 2001) will be released on vinyl individually Monday, September 1 (International), and Tuesday, September 2 (North America). Earlier this year, Rhino released audio from both shows for the first time as a limited four-LP vinyl set for Record Store Day 2014, and the collection sold out instantly. Due to popular demand, we are releasing the 1991 and 2001 performances, individually, on high quality vinyl. Each of the vinyl sets features the entire performance, including the additional songs not aired on the original broadcasts.

As many know, R.E.M. is the only band with the unique distinction of having appeared on the iconic show twice. The “Unplugged” performances are sonic snapshots that capture the guys at important points on their journey from alternative-music trailblazers to international stars who have sold more than 85 million records.

These two-LP sets serve to foreshadow another monumental release from R.E.M. coming later in the year that will dig further into the vaults of MTV. Look for more information to be announced soon.

2.”Disturbance at the Heron House”

3.”At My Most Beautiful”

* Not included in original television broadcast/i>