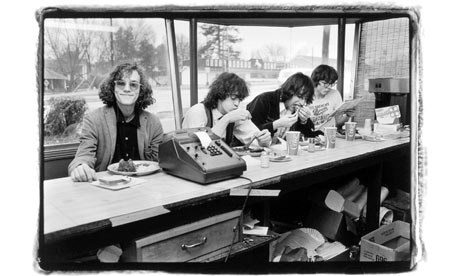 Laura Levine’s iconic photo of the band at Walter’s BBQ in 1984 is one of a handful of photos from the recent Who Shot Rock and Roll: A Photographic History, 1955 to the Present exhibition at the Brooklyn Museum featured in an article in this week’s Guardian. For the article, Laura answered a few questions about her relationship with R.E.M. and also discussed the photo which has truly become one of the quintessential R.E.M. shots. Here’s a bit of Laura’s interview, followed by a link to the Guardian article :

Guardian: How did you become friends with the band?

LL: I first heard about R.E.M. from my friend Peter Holsapple (from the dB’s), who handed me their homemade cassette single Radio Free Europe/Sitting Still at a poker game one night. He thought I might like their music, and he was right. I arranged to do a photo session with them when they came up from Athens, Georgia to play New York City in 1982. (I think I first shot them for the New York Rocker, where I was chief photographer and photo editor, i.e. I was able to assign it to myself!)

Michael, Peter, Bill and Mike came over to my apartment in Chinatown for the photo shoot, and we just clicked. After the shoot a few of us went out to Chinatown for a meal that went late into the night, and that was that. We stayed in touch and became good friends, and through them I eventually got to know many of the other bands from Athens. When Michael Stipe’s sister’s band OH-OK came to New York for the first time, he made sure that we met, and they ended up staying with me. Over the next few years I documented much of the Athens music scene (Pylon, Love Tractor, the B-52’s), spent a lot of time down there, and made a lot of friends who are still friends today.

Guardian: How long had you known them when you took this shot?

LL: I’d say I’d known them and had already been photographing them for two years when I took this shot.

Guardian: What is the context of the shot? What were the band up to around this time?

LL: This photo was taken in March 1984 in Athens, Georgia. The band were about to release their second album, Reckoning, and as their record label didn’t have a budget to send a photographer down to Athens to shoot publicity photos, I flew down on my own dime to shoot pictures and spend a few days with my friends. For the next few days the five of us explored every nook and cranny that had photogenic possibilities – railroad tracks, abandoned factories, trees covered in kudzu, roadside signs, R.A. Miller’s whirlygig yard, and of course, Walter’s Bar-B-Que. Truthfully, we stopped at Walter’s, one of their regular spots, simply because we were hungry and wanted to grab some lunch. It wasn’t a staged shot. While we were eating I saw a great photograph there, so I took it. I’m afraid I didn’t even allow the guys to eat their meals in peace.

—¢Guardian: What about this shot is special to you?

LL: The photograph has a special place in my heart not only because of the friendship, but because it documents a time and a place that disappeared soon thereafter. All of the time I spent with the guys, and all the time I spent in Athens was so special to me. It was a very happy time…. of fun, youth, experimentation and endless potential. I don’t suppose any us of could have imagined how much would change in just a few year’s time. It captures those last moments of innocence, before they moved on to the wonderful successes that they did. But mostly, for me, when I look at this photograph, I see my four friends chowing down on a good meal, smiling, relaxing, and being themselves.

Check out the article at the Guardian.co.uk.

Visit Laura’s site for more information on her photography.