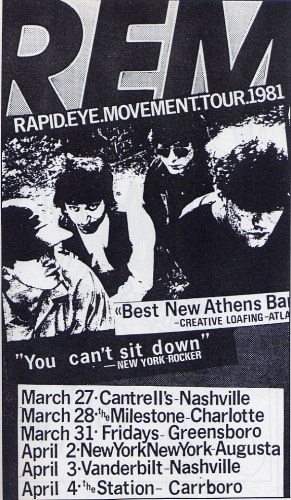 After a day off Monday, R.E.M. returns to the stage Tuesday night at the Walnut Creek Amphitheatre in Raleigh, North Carolina, for show #10 of their world tour in support of ACCELERATE. R.E.M. has a long and rich history in North Carolina, having recorded both the Hib-Tone Single–Radio Free Europe and Sitting Still–and EP Chronic Town at Drive-In Studio in Winston Salem, and both Murmur and Reckoning at Reflection Sound Studios in Charlotte. The band also played several of their first shows outside of the state of Georgia in North Carolina in spring of 1981 including Charlotte (The Milestone), Greensboro (Friday’s), Carrboro (The Station), and Raleigh (The Pier) leading up to their recording session at the Drive-In. As many fans will remember, Raleigh was the scene of a special reunion in October 2003, when Peter, Mike, and Michael were joined on stage by former drummer and founding member, Bill Berry, who played drums on “Permanent Vacation.” It was Bill’s first time playing with his bandmates since his retirement in 1997.