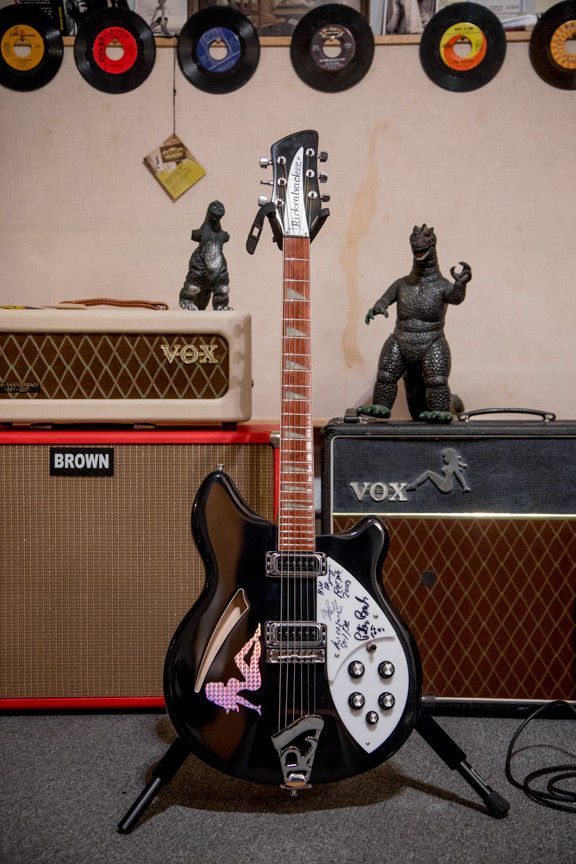 Bid on this extremely rare, first ever, exclusive offering, and the definition of a limited edition. The band is donating the proceeds of this sale to the Jeremy Wilson Foundation, a 50(C)3 non-profit, to help support the JWF Musicians’ Emergency Healthcare Fund, a program dedicated to assist individual musicians, or their dependents, when faced with a medical crisis.  This fund was designed to benefit artists like Scott McCaughey, who suffered a stroke while touring back in November.
Place your bid at the link directly below and read the full description of the guitar and a note from Peter further below.
https://www.ebay.com/itm/192404814209
This guitar has never been offered for sale, and is one of only five ever made.
This is a Jet-Glo, Rickenbacker 360 electric guitar manufactured in 2007. The pick guard was signed by members of REM before the members “called it a day” in 2011. The guitar was manufactured from a series of CAD drawings to replicate Peter Buck’s main Rickenbacker, with the ONLY difference being a lacquered, Bubinga wood fingerboard.
Rickenbacker had moved on from using the same Rosewood that they were using in the late 1970’s and 1980’s. Bubinga is now a protected species under the Lacey Act. The guitar comes with a COA from Rickenbacker, and a personal note from Rickenbacker CEO/President John Hall. It will be shipped in a stenciled, REM, touring guitar case.
The photos you see were taken in the band’s rehearsal space in Athens, GA, by acclaimed photographer Jason Thrasher, author of “Athens Potluck” (a signed copy is also available to bid upon to benefit the JWF.)
From REM Guitarist Peter Buck
Hey everybody
The Rickenbacker I have listed here on auction, with all proceeds benefitting Scott McCaughey, has a high minimum bid, and I would like to explain why.
Between 1996 and 2007, I had Rickenbacker make me five copies of my main guitar from 1981.
And the final one is available for sale here.
Over the years, I have signed many guitars for auctions, but never before, and never again, will a guitar that was actually used with REM both on stage, and in the studio, be sold while I am alive.
This is the one shot, and benefits a a great cause. I hope it goes to a great home.
Happy bidding,
Peter
*Attention International bidders. This guitar will require a U.S. Fish and Wildlife CITES pre-convention certificate in order to be shipped legally internationally.