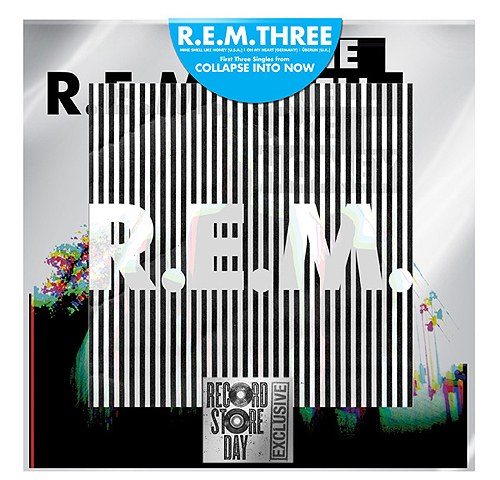 April 16th is Record Store Day worldwide, and R.E.M. will have a big presence this year as in years past. To kick off the weekend, Peter will be at Easy Street Records in Seattle (the Queen Anne location) where he will be clerking and signing records among other things. “Most of my musical education occurred in record stores,” Peter said. “Asking the older guys what they thought about new artists, keeping my ears open for the next cool thing, and listening to the wise chatter of the super hip. On April 16th I’ll be at Easy Street at noon to sign records and give out many opinions of dubious worth.”

Also on Record Store Day, R.E.M. THREE: First Three Singles from Collapse Into Now, a special three 7″ set made exclusively for Record Store Day featuring “Mine Smells Like Honey,” “Uberlin,” and “Oh My Heart” will be available at participating independent record stores. Indy stores are the ONLY place to get R.E.M. THREE and three absolutely unreleased B-sides, so don’t wait to see it pop up on ebay! It must be good, because Rolling Stone has selected it as one of the 20 Best Record Store Day exclusives before it’s even been released! Support your local record store TOMORROW.

And finally all you vinyl collectors and R.E.M. completists, the guys have contributed a live track to the limited edition Record Store Day-only WUXTRY RECORD which will be available in limited quantities at the Clayton Street Wuxtry in Athens. Special thanks to Mike Turner of Wuxtry for compiling this great record! Visit wuxtry-records.com for more information.

Incendiaries — Get the Van Halen Out Of Here

Cold Ones — Move On

New Sound of Numbers — In a Test Tube

Antlered Auntlord — I Love All My Hostage