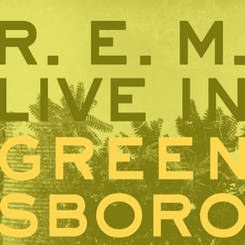 In anticipation of the Green 25th Anniversary Deluxe Edition coming May 14th, Rhino will release R.E.M. LIVE IN GREENSBORO, a limited edition, five-track EP, with songs from R.E.M.’s November 1989 concert at the Greensboro Coliseum. This exclusive CD features a handful of performances from the Greensboro show that, due to space constraints, are not found on the Green 25th Anniversary Deluxe Edition, including the Green track “I Remember California” and classics like “So. Central Rain” and “Feeling Gravitys Pull.” Limited to just 2,500 copies, the disc comes with an original (non-reproduction) patch from the Green Tour. These patches were recently uncovered in the band’s vault. The LIVE IN GREENSBORO EP will be available for Record Store Day on April 20 for $7.98. For a list of participating stores, please visit recordstoreday.com.

About the Greensboro Concert:

The concert spread across the Green 25th Anniversary Deluxe Edition and the Record Store Day EP captures a fiery performance from R.E.M., which had been forged in the crucible of nearly one year of shows. R.E.M. performed most of GREEN (“Get Up” “World Leader Pretend” and “You Are The Everything”), while mixing in early favorites like “Fall On Me,” “Finest Worksong,” “The One I Love” and “Perfect Circle” from the band’s 1983 debut Murmur. The show also finds the band testing out new songs (“Low” and “Belong”) that would appear two years later on GREEN’s follow-up, Out Of Time.