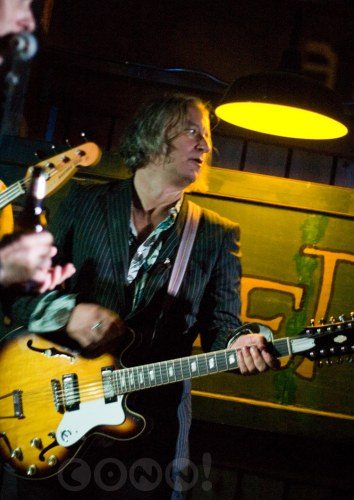 It was a packed house at the sunset tavern both friday and saturday night. and while each show had a different crowd and a different vibe it was very clear that the anticipation in the house was for a reason, the debut of a 55-year-old rock star playing his first ever solo show. the bill was for the young fresh fellows, with the needful longings friday and girl trouble saturday. and tacked onto the beginning, before the show was really supposed to begin was the reason for the strange buzz running through the building. the audience warm and welcoming, a young couple all the way from japan, a man from norway, a woman from tallahassee, new orleans, portland, west seattle, and down the block, had managed to push through the door, early, long before the sign on the steam covered glass flipped over around 9pm and read “sold out”. as the lead singer of girl trouble so eloquently said,” i never thought i would stand on stage asking all of you to give a round of applause for richard m. nixon.” the phones and cameras came out of pockets and purses and flashes started immediately, while peter growled and groaned at the mic, pounded an orange gretsch, and created his own signature brand of blues-punk-surf-rock. with the help of trusted partners in rock crime McCaughey and Rieflin, he wowed the audience with an exciting and varied set of original tunes a couple of interesting covers. for a good number of the songs Kurt Bloch expertly handled the some guitar parts laid down so eloquently by Lenny Kaye on the upcoming album release. those faithful who came, smiled and danced, laughed and sang, were witness to an unusual and touching event. it was something old and something new and something indeed very blues. So Long Johnny he grieved, in the very first song, a tribute to a fallen friend. It’s Alright came out next, his blues anthem letting the crowd know he knew what he was doing was brave and cool. Yeah….. it’s alright. Hound Dog Taylor certainly would have approved of the cover of Gimme Back My Wig while the audience did groove. and next as the set moved along, a song written that week, a song written that year, another tune from 50 years ago. I’m Alive! he, along with Scott screamed at the audience near the end. the crowd nodded and most certainly agreed because they too for that moment could also be. “use the words demented and uncontrolled”, Peter said. “spontaneous. just the start of the personal chaos i plan to bring to this planet on a musical level.” and he was right. his shows were all of those things.