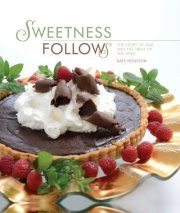 On Sunday, December 2, 2012, from 3pm to 4pm, Avid Bookshop in Athens (Prince at Hill Street) is honored to host more than a cookbook signing. Sweetness Follows is the story of a journey from near death to a beautiful life.

In April, 2007, Sam Lane, then a junior at UGA, was riding his bicycle on Prince Avenue in Athens, GA, when he was hit by a drunk driver and sustained life threatening injuries. The author’s son, Andrew, was his roommate at UGA and Sam’s lifelong friend. This book contains photos and recipes of the desserts that Katy Houston, Andrew’s mom, made and and delivered every Monday morning for over a year to Sam while he was at home in Jackson, MS, in recovery. Delivering each homemade dessert, which became known as “The Treat of the Week” was her unspoken way of showing she cared. Through quotes and stories you will see how many people expressed their love and support for Sam and his family and how the Lane family found their own ways to give in return (as R.E.M. fans know, the title of the book has a distinct Athens connection as well). The music scene in Athens was one of the main reasons Sam was drawn to UGA. In choosing one of their songs as the book’s title, Sam tied the book to Athens and at the same time exemplified the meaning and purpose of the book. In returning to Athens and Prince Avenue, Sam is coming full circle. From living around the corner on Hancock Avenue, being a working member of The Daily Co-op, loving the vibrant culture of Athens, and surviving a near fatal accident, he is now returning to show how Sweetness Follows when there is love and caring. Read more about the book and some of the details of the book signing at their Facebook Page.