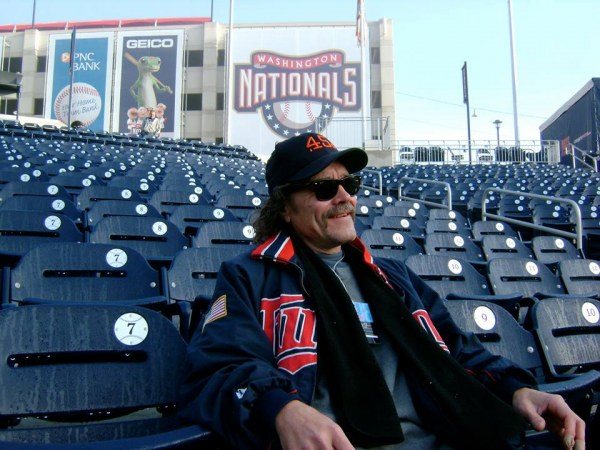 On Saturday, 7 February, the King of Cotton, Mr. Frequently Left Behind himself, Terry Carlson left us all behind. ‘TC’ (as he was known to many) passed away at his home in Moose Lake, MN–just south of the Great White North. Details list the cause as complications from diabetes, an illness that plagued him most of his life but never dampened his spirits or altered his always positive outlook. Terry had recently been ill but was said to be on the mend and planning to return to the the old merchandise ranch at the Cactus Leagues come spring training. Music and sports (not necessarily in that order) he held in great affection. He crafted a life where he immersed himself in both.

He came to R.E.M. as their touring merchandiser with Nice Man Merchandising out of Minneapolis for the Pageantry tour in 1984. After Nice Man closed their doors, he continued as an independent merchandising coordinator through the years for every tour the band did thereafter. The reason as obvious as the Twin Cities ball cap he often wore on his head: the loyalty and dedication like his is unheard of in this business called music. He was unlike anyone I’ve ever met–an unlikely hybrid of Doug Sahm and Whitey Herzog spawned from the Land of 10,000 Lakes.

On tour, I recall (at least a couple of times) during a performance, hearing Michael’s sly, cryptic shout out to Moose Lake between songs. What the audience assumed was a stream of consciousness lead into the next song. The band and crew knew otherwise. Terry had eaten lunch with or had run into Michael before the show and requested a song. More than once it was “How the West was Won and Where it Got Us” (an all-time fave of his) and probably the reason the oft-overllooked nugget was played live at all. Terry rarely ever asked for anything on tour. He gave. When he did ask, few could refuse. Fans can thank him for that.

There are countless stories. I could go on for paragraphs. However, nothing I write will assuage the overwhelming sense of loss us that knew Terry currently feel. He was one of a kind: a consummate professional and traveling colleague, a great friend, a loving father. A true, American original (that his hometown friends called Frenchy) with a heart of gold and the sharpest, dry wit of anyone I have ever met. You’d be hard pressed to find anyone on the planet who would utter an unkind word in regards to him. Suffice to say, he had a style and way that were very much his own. He affected us all.

Dick Adams, R.E.M. Production Manager might have summed up best the love, respect and understanding we all held for TC when told of Terry’s passing: “Go Twins, Terry. I know there will be a home run ball coming your way!!!!!! And say hello to Ernie Banks when you land. RIP”