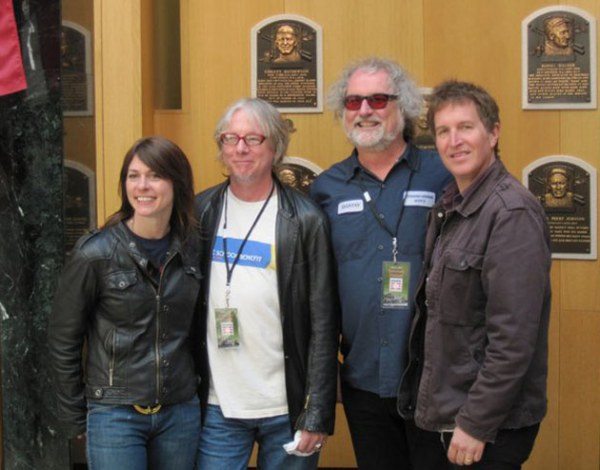 Scott McCaughey reports to HQ as he and Mike, along with Steve Wynn and Linda Pitmon, head to Florida for the Baseball Project’s spring training tour.

“The Baseball Project has packed up the van in Athens and is heading south. You know when you see ‘R.E.M./ Athens’ stenciled on those road cases that we mean business. These amps, drums and guitars still have a lot of music left in them. Was the last time I played Florida in 2004 when R.E.M. joined The Boss and John Fogerty on the Vote For Change tour? No, that’s not true, we played a festival near the Everglades in 2008. Anyway a visit to the Sunshine State is long overdue, and with Grapefruit League action winding down we’ll get there just in time to play five shows and catch some baseball as well. Drummer Linda will throw out the first pitch at the Twins game in Ft. Myers on 3/31, and Mike or Steve or I (draw straws?) will do the same in Port St. Lucie for the Mets the next day. And we’ll all sing “Take Me Out To The Ball Game” at the Rays game at the Trop April 4.

By night we’ll do what we do best, playing rock and roll in clubs all round the state. Hope to see you along the line!