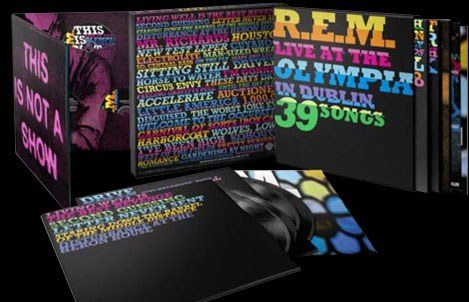 1) I’M COLLECTING VINYL?: A lot of people of late have been asking if LIVE AT THE OLYMPIA will be available on vinyl. Our answer is a definitive “Yes”! It is coming on vinyl, and in fact, Chris Bilheimer showed us the vinyl “plus/plus ” package in the HQ yesterday and man is it gorgeous!:

4 discs in 2 gatefolds with highest quality 180gram vinyl plus the 2 Cds plus the Vincent Moon DVD– plus This Is Not A Show plus a 16-page booklet with liner notes by Peter plus an Olympia shows poster. It can be found at fine retailers around the world (ask for it!) or HERE; as our good friend Mitch Easter said this morning: “an essential R.E.M. record.”

2) THIS IS NOT A SHOW: Track the screening schedule of the concert-documentary, This Is Not A Show at Cinema Purgatorio; screenings this weekend include the Plaza Theatre in Atlanta and The Showroom in Asbury Park, NJ. Chicago has just been added to the overall schedule as well.

3) TIMES ONLINE ARTICLE: If you haven’t had a chance to read Pete Paphides excellent article for the Times Online on R.E.M., you can read it HERE.

4) REMDUBLIN AUDIOVISUAL PREVIEWS: Building up to the release of LIVE AT THE OLYMPIA, we’ve been posting songs and videos for the last several weeks now. The latest song to be added to the widget is one of HQ’s personal favorites, Gardening At Night. Also, the new Bill Berg Hillinger trailer for THIS IS NOT A SHOW is quite the stunner:

5) “Wolves, Lower” and “These Days” in Brazil: LIVE AT THE OLYMPIA audio for “Wolves” and “These Days” premiered yesterday at Colunistas.ig and clicrbs.com, two Brazilian blogs, respectively. You may need to scroll down a bit to find both posts. Also, hats off to Diego de Godoy, filmmaker and R.E.M. pal who has set up a screening of This is Not A Show in Brazil (more details to follow).

1) Destroy Rankin: To celebrate Youth Music’s10th Birthday, 70 of the world’s greatest musicians and visual artists have been enlisted to create a groundbreaking body of collaborative artwork called “Destroy Rankin” based on Rankin’s iconic portraits. Michael is one of the musicians participating in the collaborative effort. Original works by Michael, Damien Hirst, Douglas Gordon, Debbie Harry, U2, Mat Collishaw, Marianne Faithfull and many others will be auctioned to support Youth Music, the UK’s biggest music charity for young people. View Michael’s here…

2) If you haven’t already gotten your tickets to the LIVE AT THE OLYMPIA Listening Party in Athens on October 26th, you can learn more about the event and purchase tickets from the links in this article.

3) New Yorkers should be sure to mark their calendars for “Who Shot Rock and Roll: A Photographic History, 1955 to the Present” at the Brooklyn Museum, October 30th through January 31, 2010. The exhibition includes a photograph of R.E.M. by our friend Laura Levine. Laura tells us that the exhibit is “the first major museum exhibition on rock and roll to put photographers in the foreground, acknowledging their creative and collaborative role in the history of rock music.” This should be an amazing exhibition so please stop by to see Laura’s iconic photo of the band at Walter’s BBQ.

3) Tony Fletcher’s new book on the NY Music scene 1927-1977, “All Hopped Up And Ready To Go”, will be available on October 26th. The book contains a blurb by Peter who highly recommends it.

4) Mercury Artworks in Athens has an opening tonight featuring works by local artists including Michael and Chris Bilheimer. If you’re around, definitely worth stopping by…