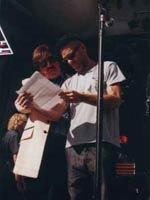 Remhq: So Tony, how you been?

Tony (T): Usually I’m a model specimen of manhood. Recently however, Iâve been forced to wear a neck brace due to an altercation I had with security guards at the Hollywood Bowl.

remhq: I take it youâre referring to the R.E.M. concert?

T: Stop right there, Sparky. Letâs get one thing straight. It was my concert. That âsold outâ audience came to see ME. Rem used my name to pack the joint, just like that bastard Andy Kaufman did years ago. Theyâre riding my coattails to get places.

Remhq: Surely R.E.M. could have filled the Hollywood Bowl on their own.

T: What are you talking about? I never heard of those creeps. My showbiz pals Mitzi Gaynor and Shecky Greene never heard of them either. And believe me, Shecky knows everyone in the biz. Itâs a clear-cut case of some wannabes trying to cash in on my success. I was taken advantage of. I got this call a week before the show by some promoter named Curtis Downer or Daumer who sweet talked me, telling me how all the biggies played the Bowl – Garland, Streisand, Eddie Cantor, Sinatra – he tells me it was only fitting that the biggest star of them all, Tony Clifton, should do the same. So I agreed.

remhq: You bill yourself as the International Singing Sensation, I understand.

T: Correct. I can sing 8 octaves and hold the Guiness Book of World Records for longest held note — beating Johnny Mathisâ all time record by a staggering 3 minutes and 12 seconds longer.

T: Youâre damn right it is. I needed Rem like a shotgun blast to the face. They needed me.

T: Rem, Clem, Hem, Phlegm, whatever. Their name is mud as far as Iâm concerned.

remhq: Did you meet them before the show?

T: Of course I did. I even did a sound check with those hayseeds.

Remhq: Well who did you think they were?

T: I was under the impression that they were my warm-up act.

Remhq: Your warm up act?

T: Correct. I thought they were gonna come out and do 2 or 3 songs and that was it. The way I looked at it, I was giving them their big break. Usually I have a ventriloquist or stripper open for me.

Remhq: Did you get a chance to talk to them during the sound check.

T: They didnât say much. Especially after I told them they were playing âMan on the Moonâ all wrong. To me, it should be performed more like a calypso, like âLady of Spainâ. I also told them that I expected to see them in tuxedoes for the show and if they did a good job Iâd consider taking them on the road with me as my band. 65 bucks a night cold cash a piece. Of course, theyâd have to pick up their own lodging and meals. That big guy looks like he could eat you out of house and home. As far as the chickaroonies were concerned, Iâd play it like Elvis. I get first pick and they get the leftovers.

Remhq: What did they say?

T: Nothinâ. Theyâre used to other peopleâs scraps. I mean how often are you offered to tour with a international singing sensation, bag 65 bucks a night and get sloppy seconds. Iâm sure they thought they died and went to heaven. Then I pulled the bald headed guy aside.

Remhq: The bald headed guy? Do you mean Michael Stipe?

T: I donât know any of their names. The thin bald guy. He needs a few porterhouse steaks to put a little meat on his bones. So I explain to this guy that if he wants to ever succeed in show biz, he needs a hairpiece. Like me.

Remhq: I canât believe you actually told Michael Stipe to get a toupee?

T: I call âem, as I see âem. The man needs a rug. Your public deserves it. Come to think of it, I should of known that something was out of kilter when I asked them to play VolÃ¡re and they didnât know it. Can you imagine not knowing VolÃ¡re? What the hell is this world coming to?

Remqh: What provoked the impromptu assault on Michael and the rest of the band?

T: I thought I was going on at 8:00 instead the stage manager didnât get me until 10:30 p.m. I was steaming by then but being the consummate performer that I am I decided to bite the bullet so as not to disappoint my fans. So I entered on cue for âMan on the Moonâ. The crowd went wild. Well my eyes almost popped out of my head when I saw the way the band was dressed. Not only were these yokels not wearing tuxes but they were wearing the same street clothes that they wore in rehearsal. Damn hippies! I was mortified. Still I kept singing. But during the bridge, I let baldy know that I wasnât a happy camper.

T: Yeah, yeah, whateverâ¦ I shouted at him that they were dressed improperly and they were supposed to play only 3 songs as my opening act, not SEVENTEEN! At that point, I was so furious that I slammed that skinny son of the bitch to the ground and started entertaining my fans without him. That little prick was stronger than I thought. He had the balls to get back to his feet, grabbed a mike, and tried to upstage me. I lunged for him again, but the tall guitar player with the polka dot shirt got purposely in my way.

T: Like I said, I donât know their names. But this big motherfucker blocked me so I couldnât take another swipe at his buddy. Theyâre thick as thieves that bunch. I ran off stage looking for a crow bar to even the score. Those ruffians were not ganging up on me. I managed to grab a big tumbler of water, ran back out and threw it right into Stipeeâs face. Then I took his entire music stand, tossed all the sheet music off it and threw the stand itself into the crowd. I think it hit some fat broad in the front row. By now, that other creep with the long blond hairâ¦

T: Yeah, that piece of shit. He starts calling for security. So this 300-pound guerilla runs out on stage and tries to apprehend me. Meanwhile, the songâs still going on and the crowd is going berserk. Iâm yelling at the security guy that heâs manhandling the wrong guy. He should be removing the band from the stage, not me. He catches me. I break free and grab 2 glasses of water. I doused one on that asshole Mills who called security and tossed the other on Bucks. I tried to electrocute that fool. By now, security is all over me. And Iâm hauled out of there and unceremoniously tossed into a LAPD squad car and taken to the Hollywood division to be booked.

Remhq: I understand that R.E.M. chose not to file charges and you were released on your own recognizance?

T: Damn right they didnât file charges. Theyâre in enough deep shit already. First they commandeered my own concert and then had the audacity to have me bodily removed.

Remhq: What do you expect. You started attacking them on stage.

T: Fuck you and the horse you road in on. And if you keep standing up for them, Iâll push your face in your soup.

Remhq: Unfortunately not. I heard about it from a lot of people who were quite upset. I read about it in the L.A. Times.

T What did the Times say?

Remhq: Well, L.A. Times rock critic Robert Hilburn who was in the audience that evening said this and I quote: âR.E.M. found a more lively way of honoring one of its fallen heroes, Andy Kaufman. Stipe invited Tony Clifton, the late comedianâs volatile lounge-singer alter ego on stage to join in âMan on the Moonâ. R.E.M.âs song about Kaufman. Things went nicely for a while, as the singerâs shook their hips and looked skyward when they go to the lines âAndy are you goofing on Elvis?â But Clifton then shoved Stipe to the ground and later poured a glass of water on him and other band members, getting so out of hand that a security man came on stage to lead him away. As the guard got into a fierce struggle with Clifton, you couldnât help wonder for a second whether this guy hadnât just wandered onto the stage and Stipe had tried to make the best of it.â

T: He didnât say anything in there about coming to see me and having to listen to 17 songs by those charlatans?

Remhq: Not a word. I think he actually enjoyed R.E.M.

Remhq: Gee Tony, donât you think youâre being a little hard on the guy? Itâs not like he or REM set out to take advantage of you.

T: Well, a court of law will decide that!

T: Youâre damn right I am. The audience came to see me, not them. Therefore I want the entire box office receipts from that evening and all concessions â including parking. They can, however, deduct their security costs from what they owe me, as security that night did a magnificent job of subduing me so I wasnât able to hurt myself or others. Thatâs it. I donât want to talk any more. I got to take a dump.

Remhq: Well, I want to thank you Tony for taking the time out of your busy schedule. Iâll be interested to hear R.E.M.âs response to your interview.

Remhq: R.E.M, the group youâre accusing of ripping you off.