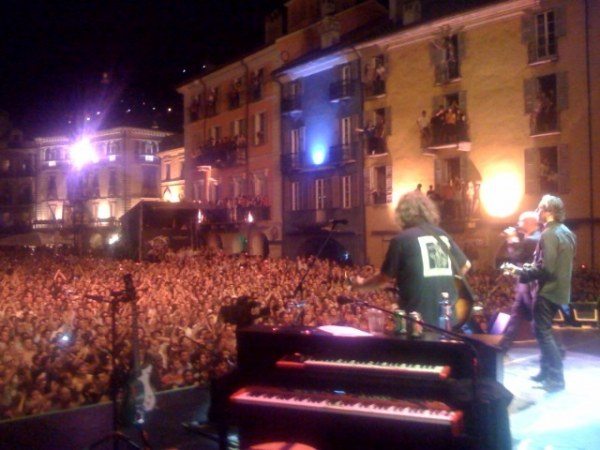 R.E.M.’s world tour moves through Locarno, Switzerland tonight (the band has just finished their set (enter remlocarno at “query” to see twittered set list) at Moon and Stars in the Piazza Grande Locarno as we type…getting ready for the encore) and over to Perugia, Italy Sunday night for the Umbria Jazz Festival; the guys will then play four more dates in Italy–Verona, Naples, Udine, and Milan–followed by the Paleo Festival on July 27th (after which they will take a short break).

This past week was certainly a memorable one as the band headlined both Oxegen and T In The Park for massive festival crowds. Those shows were followed by stops in Dresden and Berlin where capacity crowds at Elbufer and Waldbuhne helped the band kick off the first two of eight total shows scheduled in Germany on the world tour.

Please stay tuned for reports from the road and don’t forget to follow the action (tweets, photos, and video) at the tour site.