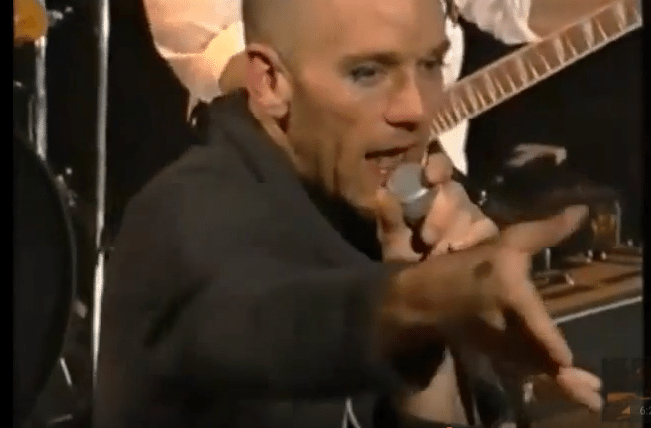 November 6 marks the anniversary of R.E.M.’s legendary UP promo show from 1998 at the Orpheum. The show was special for a number of reasons–the gathering of fan club members from countries all around the former east and our long and wonderful connection to Klaus Hoffmann of Warner Austria, a longtime friend and fan of the band.

“Vienna was always a key stop for the band whose first hit was “Radio Free Europe” recalls Bertis. “We saw so many people from so many countries in the former east whenever we turned up there. Great memories of all of our times there but that particular show was special.”

REMHQ’s David Bell remembers the buzz in the office when invitations were sent out to fan club members to attend the show.

“We knew that Austria would most likely be the only option some members would have to see the band on the promo tour and for some it would involve a lot of travel, but we wanted to give them the option–the shows in London, Paris, Germany and Italy were already at full capacity and there were so many fan club members in those countries that we had to randomly select audience members for those shows. For Vienna, we sent invites to every fan club member the band had in Austria, the Czech Republic, Poland, Slovakia, Slovenia, Hungary, Croatia, Serbia, Romania, and maybe even Greece if I remember right. Have I left anyone out? It was an unbelievable, once in a blue-moon convergence of fans from some countries where the band normally didn’t even tour. What was really special for me was that my brother and his wife took the train from Hungary for the show.”

“That whole weekend,” Klaus adds, “was and remains one of the highlights of my professional career. Having your favorite band play in a small venue… how could it get any better?”

The guys even threw in a great cover of Iggy Pop’s “The Passenger,” (watch it below) which was briefly marred by a faulty PA. As Klaus remembers, “My heart briefly stopped when the PA broke down, but the crowd still loved every second of it.”

To cap off the evening, the band received platinum awards for UP after the show.

The next day, Klaus recalls, also had important significance. It was on the day after the promo show at the Orpheum that the idea for R.E.M. to play at Vienna’s State Opera (which they did in 1999) originated when he, Michael, Mike, Bertis & Katherine Downs, and Sue Wildish (of WEA London) went to see a French opera there (“Guillaume Tell”): “We were sitting in the Emperor’s Box, and I told Bertis that bands would play the venue during Jazz Fest Vienna.” Klaus added, “After the opera, we went for dinner where the plan grew.”

Thanks for the great memories Vienna!