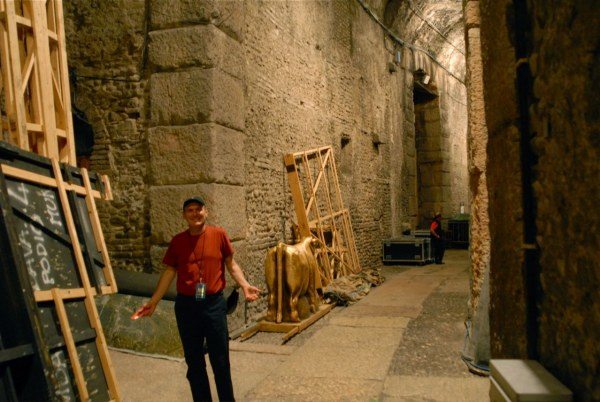 In a summer of uncommonly gorgeous settings for R.E.M. concerts (Bilbao, Lyon, Verona, Locarno, and Dresden immediately come to mind), last night’s outside Udine (in the far northeastern corner of Italy), stood out in its unique beauty: the show was in the huge interior courtyard of a centuries’ old manor house that now houses Friuli’s exceptional contemporary art museum. The crowd and band certainly responded to the soft summer night in such a splendid setting with an amazing concert that included some little-played favorites like Turn You Inside Out, Nightswimming and Sitting Still (and End of the World popped up again, as it has done a few times now in Europe). And I’m Gonna DJ and Supernatural, placed early in the set rather than at the end, worked great and really got the crowd going. Fun, loud, exuberant night and what a place– Fruili was new to us, and quite a revelation.

Now we are in Milan for a day off after quite a few miles traversing pretty much every corner of Italy . . . . well, except for the far west, but we will be in Torino on the second leg (27th Sept). Tomorrow night a soldout Arena Civica, a cool intown stadium where we have never played, awaits. And Milanese fans are always among the best crowds of any tour. (check out this really cool digital fanzine compiled by Virgin Radio Italy to which our good friend Gianni Sibilla contributed in commemoration of the band’s Milan concert)…And on Sunday we finish this initial sprint through Europe with the band’s second appearance at the beloved Paleo Festival in Nyon, near Geneva. But a lot of great shows remain in the ensuing months starting with the Frequency Festival in Salzburg on August 14th, then favorite places Budapest and Prague the middle weekend of August, on to more German shows and UK, Scandinavia and the Baltics over the next several weeks, all the way to Istanbul and beyond by early October. See the LIVE section for all tour dates and ticket details.

Anyway, the band is playing better than ever, the changes from night to night keep returning fans, and there seem to be a lot of those this time, guessing and surprised.

p.s. The Tour Site is fun for keeping up with shows (sometimes in real time, sometimes not depending on the efficacy of Twitter and Flickr on a given night) many people are sharing their concert media and we are enjoying the development of a technology that a few short yers ago wouldn’t have been dreamed of. . . lots of great photos and videos up– thanks to all who are posting their impressions for the benefit of all.

p.p.s. Here is a nice review of the Lyon show the band played in today’s Daily Mirror.